I am making an RTS game which is having performance issues.

I'm not sure what details to include but:

*The camera is fixed angle and orthographic

*The profiler says drawing takes up about 50% of CPU when units are moving.

*All the logic is done by a c# script outside of monoDevelopment but called through a gameobject each frame, (takes 2% of cpu in tests).

*Units are put in place using the "transform.position" command each frame.

*Units and tiles are instantiated and destroyed when the Camera passes them.

*The game is using rigged .3ds models for the units.

*The units have disabled rigidbodies.

*Each tile in the game is a separate sprite. 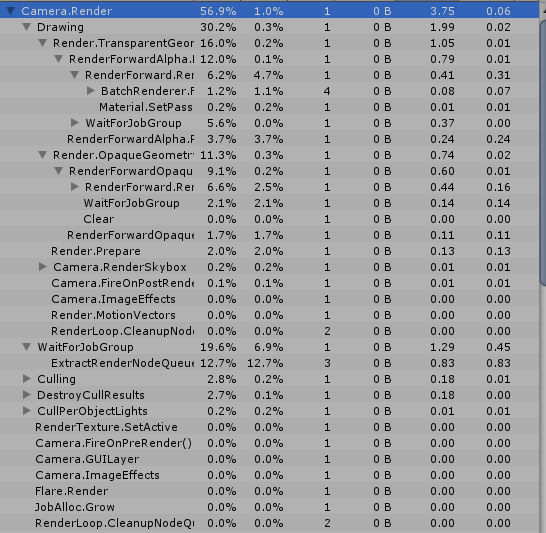 Well, from your list, I can tell you somethings that may be the cause of lag:

I think this is what is overkilling your performance. Creating and destroying them over and over, especially in large count, usually drops your performance (this is from experience). One fix would to be to simply place the objects in the scene and moving the camera via script.

This could be causing the lag also. As far as I can tell, it seems pretty pointless to do so every single frame (unless there is something I am missing). You should only change their position that way only when you need to.

Another thing that may help a little is instead of having all of those ground tiles, create a tiling material and apply it to a very large plane. This should create the same effect (unless you have other tile types that wouldn't fit with that).

1
How would I check the range against the entirety of an enemy object, and not just it's transform.position?
3
Is there a way to turn collision detection system off completely in Unity?
5
Unity: How can I get realtime image capturing at ~60fps?
2
Bizarre Physics FixedUpdate Lag spikes