How to Create Snakelike Objects

I am working on a 2D action platformer in Python, though my question is a general one about creating snakelike objects which move in a variety of patterns.

I have noticed this kind of object in many 2D games. For example, this boss in Contra has snakelike arms. 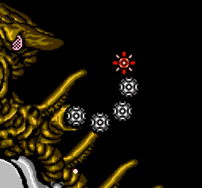 And this enemy from Super Metroid clearly seems to be composed of multiple segments.

I want to create snakelike objects in my game, though I don't know where to begin or what I may need to add to my physics engine to support them.

So far, all my enemies and hazards consist of single sprites and are programmed using simple attributes like velocity, acceleration, parametric curves, etc.

Maybe I need to create a class for the segments, designate one segment instance as the leader, and update the positions of the other segments based on the position of the segment in front of it. But how do I program different patterns of movement? Do I need to learn about so-called joints and implement them between the segments? I currently don't have them in my engine.

I know I could easily create a segmented object where each non-leader segment is moved to the previous position of the segment in front of it (like in classic Snake, described here), but I want more complex patterns than this. Sometimes I may want the object to be flailing from an anchored point, and other times I may want it to be following some pattern across the screen.

I really don't know where to begin in trying to create this kind of object and would greatly appreciate any advice.

How do you implement snakelike objects with a variety of movement patterns?

(Given the ubiquity of this kind of object in games, I was surprised that I couldn't easily find much about it online. I think a detailed write-up on it would be cool.)

Yes, you would add a distance-constraint (known also as ball-socket joint) between the segments, and keep doing your normal physics on each segment.

There is a really simple and effective way to satisfy these constraints, which can be implemented in only a few lines of code.

The idea is that you reduce the error in a constraint partially, over and over for all constraints, in a loop. If you keep reducing the error by, let's say 20% in each iteration, it will eventually settle to a stable state where all the constraints are satisfied.

Note that it helps to keep the head position of the snake as-is, to make the tail follow the head, instead of vice versa.

So in pseudo code:

..which is all you need to have the tail follow the head.

NOTE: you get a slightly faster convergence, and more stable solution if you reduce the error in the links in a random order! So in the 10 times we scan over the links, we update them in a different order.

Not the answer you're looking for? Browse other questions tagged 2d physics movement python joints or ask your own question.

5
How to make Snake Body in Snake Game?
2
How to constrain a ball and chain like object?

2
Efficient way of detecting a touched object in a game?
5
XNA 2D: How to load/unload specific content by level
2
When is messaging/observing preferable to 'built-in' functionality in game objects?
0
Irregular gravity bouncing
2
How to select random points within grid meeting min/max distance requirements from each other?
0
How to synchronize a parent and child position?
1
Animation Dilemma: How to create authentic discontinuous block-like character movement
1
Frame independent box2d object movement
2
How to constrain a ball and chain like object?