How can I make user-friendly polar coordinate movement around a circle?

I am working on a 2D game where you land on planets with a ship and can exit the ship and walk around.

These planets are very small (think ~350 pixel radius sometimes), and are seen from the side. So you can easily see the whole planet on the screen generally.

This may be sort of confusing so here's a picture: 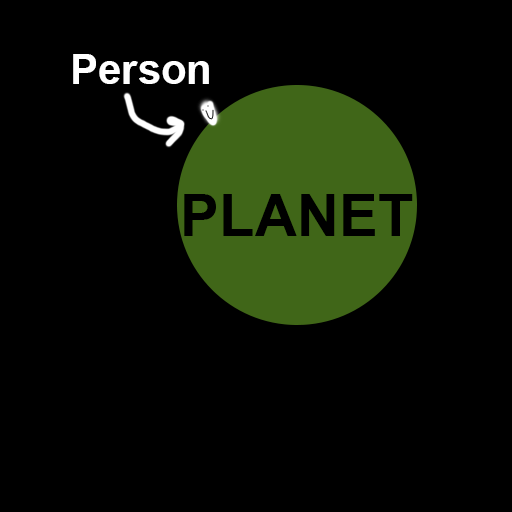 Any ideas on how can I make this more user-friendly?

My first suggestion would be to just stick with A = Counter-clockwise and D = Clockwise movement. It is not very confusing and is pretty much the "standard" (i.e. most common) choice when it comes to orbital movement like this.

Another way would be to change the way your game moves. Instead of moving the player when they are on a planet you could rotate the planet instead. This is also a very common choice but it can be disorienting if you have multiple planets on screen since everything except the player will have to rotate. If you decide to use this method it could help to only display a part of the planet to reduce the amount of moving objects your eye has to keep track of:

If you are free to use the mouse you could always use mouse clicks to move around. Clicking on a location will cause the player to move towards that point and it will automatically choose the shortest direction. Circles are "clicks" and arrows are shortest direction. 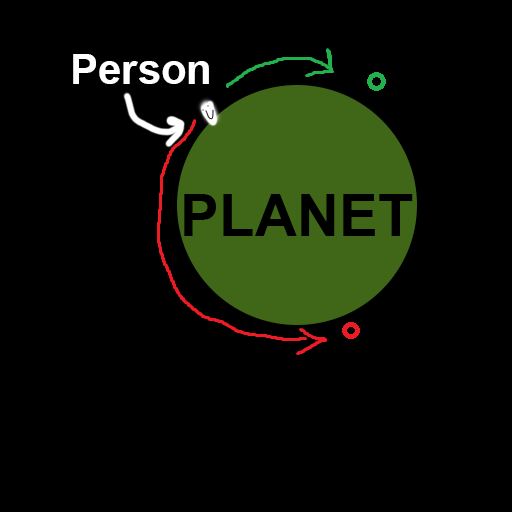 As an added bonus it's also very easy to translate to Mobile controls if you wish to publish your game as an app as well.

One approach (often used in third-person games with stick-based movement that also have non-static cameras) is to establish the frame of reference for movement every time the input begins (in your case, when the key is pressed) and keep that frame of movement until the input terminates (the key is released). This means the "A" key would always move the character "to the left," whatever that was -- clockwise if it's on the bottom of the circle, counter-clockwise otherwise -- until the key was released.

Unfortunately, since you're constrained to a circle, this technique will still fall apart when the character is at or near the extreme left or right extents of the circle. You can make it work simply by choosing arbitrarily which direction to go in, but the user may find it confusing. Possibly more confusing that simply sticking with the existing "A is always counterclockwise" approach you have now.

I suggest you take a look at a similar concept but then in 3d: Super mario galaxy.

You might wish to "movement blur" the universe when moving so it looks more natural and the eyes won't focus on the moving parts shifting positions.

I assume that Nintendo invested quite some research in getting the game play as smooth as possible and this is what they settled upon. I always like to look to what the bigger companies figured out, hoping they invested something in R&D for maximum comfort and playability.

Additionally, a circular W-A-S-D or W-D-S-A pattern of input results in circumnavigation of the planet, which seems fairly intuitive.

Holding down more than one key could just cause the most-recently-pressed key to take precedence, or you could use more complex behavior such as having eight limiting points.

This is one of two classic "mental model" problems suffered by a lot of games.

Every player develops a "mental model" for how game controls map onto game actions. As games have become more and more similar in their controls over time, people have begun to expect their established mental model to apply to new games, rather than developing separate models for separate games. Which would be fine, except that not every player has the same mental model of how controls should work.

For example, the other classic "mental model" problem is whether pressing up on a joystick (typically the right analog stick of a gamepad) should mean looking up, or whether it should mean tilting forward (i.e.: looking down). Neither model is objectively right, but most players only keep one of these two possible mappings in their head, and will be thrown off if a game does something different than they personally have come to expect.

Your question is exactly the same dilemma; the "mental model" issue here is whether pushing right on a control stick means "move to the character's right" (as in Resident Evil), or "move toward the right side of the screen" (as in Mario). Or in this case, "move clockwise" (as in Tempest, when using a traditional conversion from paddle to joystick controls).

Every player will have a built-in model that they're used to which they will be reluctant to change (or have difficulty changing). In any such "mental model" issue, you have three options for how to handle the issue:

Option 3 ("re-design the game so the mental models don't conflict with each other") in this case would mean rotating the camera with the player, so the player always appears upright on screen. That way, "right means go clockwise" and "right means go toward the right side of the screen" are always in alignment; there's no conflict any more and players won't become confused depending upon their mental model of how controls are supposed to work.

Any choice here is valid; the different options just require different amounts of work and impose different constraints on your game. If it's really important to you for the player to be visible moving around on the "bottom" side of the planet, either for thematic or artistic reasons, then you won't want to use option 3, and should use 1 or 2. If not, then option 3 is probably the ideal choice.

A minor implementation note for the "pushing the joystick to the right means moving toward the right side of the screen" control style: When implementing this control style, you should do it by mapping the joystick direction into a clockwise/anticlockwise choice, and then keep that same clockwise/anticlockwise decision until the joystick moves again, even as the player moves around to the bottom side of the planet. That is, pressing right while on top of a planet, or down while on the right side of a planet, would each start the character moving clockwise, and the character will then keep moving clockwise even around the bottom of the planet until the player moves the joystick again, even if they move to a part of the planet where that joystick direction would now be interpreted as being a different direction.

This technique is often called "locking" the joystick control, and is generally used in 3D games when the camera makes a sudden rotation (which you don't want to cause the player to suddenly change direction), but can also be useful here in a 2D game, if a camera movement would otherwise make the player's unmodified inputs suddenly mean something different than they did before.

Use W/S/A/D for input (or up/down/left/right). Treat the input as an 8-way direction (including diagonals).

Then move the player in whichever valid direction (clockwise or anticlockwise) is closest to the direction that is pressed.

One option is instead of defining the association between key and direction of movement, to have:

This requires the character to have a clearly visible "direction".

Not sure that really makes much more sense than other options here, but just in case....

But while this makes navigation on the planet easier, it might disorient the player relative to other celestial objects. This is a tradeoff you need to decide on for yourself.

If you choose to use clockwise/counterclockwise movement, there are a number of things you can do to make the system easier to intuit for your players.

Give the character prominent distinguishable directions

If the character is half blue and half red, then orientation becomes easy for players to remember. Instead of having to identify "clockwise" or "counterclockwise", the players either move in the blue direction or the red direction. If the character is always facing in one direction (preferably clockwise, so that movement is most intuitive while upright) it's even better, because English speakers (and anyone else with a left-to-right language) naturally tend to associate 'right' with 'forward', reinforcing the connection between the controls and the direction of movement.

As long as you are moving your character, it's easy to maintain what orientation your controls are in. After all, continuing to move in the direction you are moving in doesn't take any action at all, and when you want to reverse your movement, there's only one other key to choose. It's only when you start moving again after having stopped that you are faced with a choice. The longer you pause, the harder it will be to pick up again based on what you were doing before. By reducing pause frequency and pause lengths you can keep players from forgetting how to move.

There are multiple approaches to this.

1) How I would approach this would take sections of the planet: the top, left, right, and bottom sides (more if desirable). And have it so after the user presses a direction, the character will keep going that direction till they release that button. So if the character was on the left side and the user pressed up, then the character would go clock-wise till release. This way you don't have to worry about changes in the frame of reference while the character is moving, only after.

2) Another way would like how "Lovers in dangerous space-time" approach it. With a joystick, rather than have the frame of reference depending on the surface, they have it so the angle the joy-stick was the desired spot for "character" to stop at. So their frame of reference was at the center of their "planet". I say character and planet but they had modular ship parts on the outside where you determine where they go, ie which direction the thrusters are pointed to move the ship.

3) How you have it designed now. It can get a little getting use too but nothing players haven't seen before. You could edit it though so it appears the planet is rotating instead so the play is always "on top".

Not the answer you're looking for? Browse other questions tagged 2d movement user-experience .

61
Moving ships between two planets along a bezier, missing some equations for acceleration
5
Collision Detection with SAT: False Collision for Diagonal Movement Towards Vertical Tile-Walls?
1
Control convention for circular movement?
2
Asteroids Movement
0
How can AI compute movement in 2D games
4
How can I make Diagonal movement?
1
Handedness of 2D coordinate systems