I've been following the Rastertek tutorial on deferred shading (http://www.rastertek.com/dx11tut50.html). I have implemented it in my own architectural way but have ended up with the same issue as the tutorial; if you get the source and take a look, it appears to be working fine - but if you move the camera around you can see that only the front 2 faces are being rendered, and its like as if the cube is only being rendered to some kind of invisible pane - viewing from behind it is completely invisible. In my image you can see that the model is being completely cut off. Is my 2D render texture possibly floating out in that space?

To provide the amount of code I have would be very dodgy. If you can help me out conceptually or take a look at the downloadable source code I would very much appreciate it.

This image is from about 45 degrees to the side - it appears to be getting cut off along the red lines I've drawn (ignore the missing topside - thats just the light only going down the z plane): 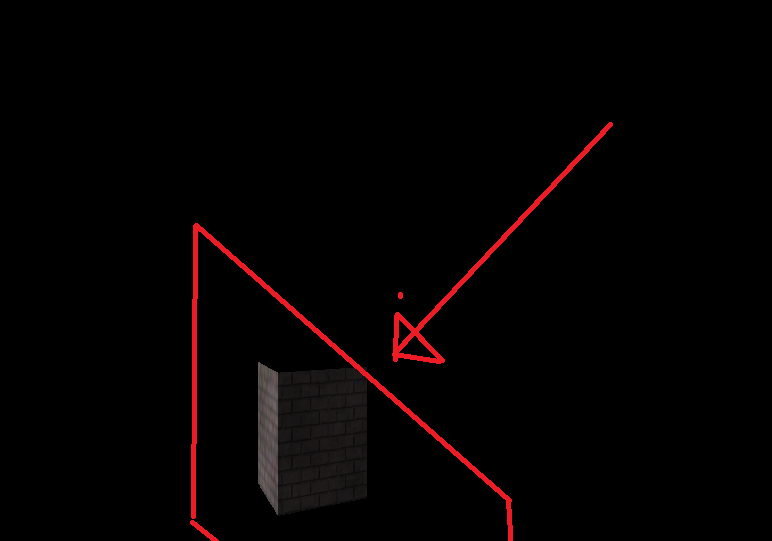 Turns out I needed to set the camera back 1 unit so the view matrix wouldn't trim my screen down when I changed the camera yaw.

Not the answer you're looking for? Browse other questions tagged rendering directx11 or ask your own question.

0
Fullscreen triangle SV_POSITION and deferred shading
3
How to Load and Apply a Cube Map with DDS Texture Loader?
4
Texture coordinates do not map correctly in Direct3D11 game engine
1
Deferred Shading and Transparency Clarification?
0
Tile-Based Deferred Lights Flicker
3
Why does rendering to a texture cause transparency here?
7
“DirectX will only draw polygons with an [X,Y] from [-1,-1] to [1,1] and with a Z from 0 to 1.”, What does this mean and how to work around it?
0
DirectX depth/order render issue