How can I control the volume of the music and the sound effects seperately with two sliders? 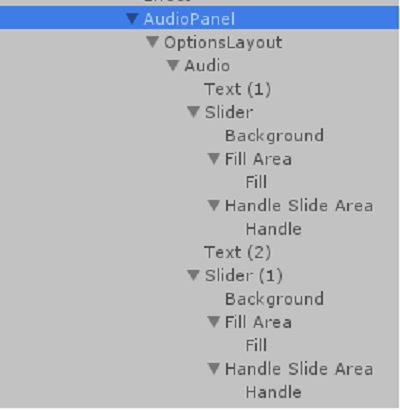 Now in the Hierarchy I have some Audio Sources components for the sound effects and I want to control them with the Slider (1).

The problem is that the AudioListener in the script control all the Audio Sources. Music and Effects. Or maybe only the Music ? U'm not sure. But when i change both sliders when the game is running it's changing the music volume.

My question/s is how to control with Slider only the volume of the music and with Slider (1) the effects volume ?

And how can i get all the effects audio sources in the script and control the volume of them using the Slider (1) ?

The audio source component of the music is attached to GameObject name Sound. All the other audio sources components are effects and are in some places in the Hierarchy.

You will need to use an audio mixer.

An audio mixer lets audio sources specify which group they should output to, so you should create two groups, one for sounds effects, and one for music. You need to then expose the attenuation (volume) parameter of each group to code. Then, the music audio source can specify that it should play through the music group, and all the others play through the sound effects group.

Then, in code, you need to get a reference to the audio mixer (for example by adding a reference in a Monobehaviour and assigning it in the inspector) and set the volume of individual groups using the names of the parameters when they were exposed from the inspector.

Note that the range of attenuation is -80 (muted) to 0 (full volume). And it’s not linear, so the slider won’t control the volume smoothly if you just map the volume directly from the slider to attenuation value. You will need to do a conversion using mixer.SetFloat(parameterName, Mathf.Log10(sliderValue) * 20); to get it nice and smooth (assuming sliderValue ranges from 0 to 1). See here for more details.

Note: audio sources created in the editor should be assigned to groups in the inspector. To assign an audio source created at runtime to the correct group via code, use AudioSource.outputAudioMixerGroup

If all you want is to control the music and sfx volumes through separate sliders, then your AudioManager just needs a few simple changes. :)

The comments explain everything.

0
How to save slider button positon on saved value.?
0
Unity2D: How to save volume of audio source when game is restarted?
0
Using PlayerPrefs to save audio volume throughout scenes in Unity
1
How can i make fade in/out of the alpha color of a material from black to none black?
0
Why when drawing a box using LineRenderer the connected points of the lines is not complete?
3
How to completely stop the camera from clipping into the ground
1
Why when adding audio foot steps to the character using animation events only one foot play the sound?
0
Unity3D playing sound when Player collides with an object with a specific tag