How do I rotate a structure of hexagonal tiles on a hexagonal grid?

My 2D isometric game uses a hexagonal grid map. In reference to the image below, how do I rotate the light blue hexagon structures by 60 degrees around the pink hexagons? 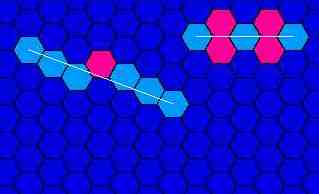 In this code Number is the main hex and Point is the hex that I want to rotate, but it doesn't work:

As Martin Sojka notes, rotations are simpler if you convert to a different coordinate system, perform the rotation, then convert back.

I use a different coordinate system than Martin does, labeled x,y,z. There's no wobble in this system, and it's useful for lots of hex algorithms. In this system you can rotate the hex around 0,0,0 by “rotating” the coordinates and flipping their signs: x,y,z turns into -y,-z,-x one way and -z,-x,-y the other way. I have a diagram on this page.

(I'm sorry about x/y/z vs X/Y but I use x/y/z on my site and you use X/Y in your code so in this answer the case matters! So I'm going to use xx,yy,zz as the variable names below to try to make it easier to distinguish.)

Convert your X,Y coordinates to the x,y,z format:

Perform a rotation by 60° one way or the other:

Convert the x,y,z back to your X,Y:

as you see here: 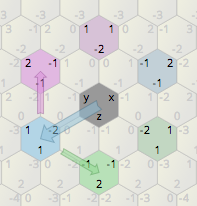 Let's first define a new number. No worries, it's an easy one.

Of course, we need a way to translate those points from our coordinates to those we do the rotations in, and then back again. For this, another bit of information is needed: If the point we do the rotation around is to the "left" or to the "right" of the vertical line. For simplicity, we declare that is has a "wobble" value w of 0 if it's to the left of it (like the center of the rotation [0,0] in your bottom two pictures), and of 1 if it's to the right of it. This extends our original points to be three-dimensional; (x, y, w), with "w" being either 0 or 1 after normalisation. The normalisation function is:

Our algorithm now looks as follows:

A simple version of our "triplex" numbers based f in C++ would look like this:

Not the answer you're looking for? Browse other questions tagged 2d rotation maps hexagonal-grid .