I've been thinking about a multi player RTS game. The part that I can't seem to get around is keeping unit movement synced. If I move unit A to spot XY, I have to communicate that back to server that relays to the other client.

This is a reposted question from stackoverflow. I found that this site was probably a better place for the question.

I assume you're intending to use the Client-Server networking paradigm? In which case you cannot trust the clients to handle the actual positioning of units, you must delegate that task to the server. You then take the command list from each client per-tick, and compute the movement of each unit, once this has been completed, next tick you relay the position of each unit relevant to each client (either on a whole-map basis, or per-view basis), and start the process again.

You don't want to sync the positions of all the units from the server to each client; that will take up way more bandwidth than you need. You'd also have to deal with interpolating/extrapolating unit positions, etc. Almost no professional RTS's use client/server!

Instead, you want to send only the players' commands. Rather than moving the units immediately when the player clicks, you'll queue the move-command to be done at some point in the future - usually just a couple of frames. Everyone sends their commands to everyone. A couple of frames later, everyone executes all the commands, and because the game is deterministic, they all see the same result.

In fact, there is one more thing that is usually done: eliminate the server altogether. Have every client send their commands to every other client. This reduces lag (instead of a command going from you-->server-->opponent, it just goes from you-->opponent) and makes coding easier, since you no longer need to code a separate server. This sort of architecture is called peer-to-peer (P2P).

The downside is that now you need a way of resolving conflicts, but since players' commands are independent of each other in most RTS's, this usually isn't much of a problem. Also, it doesn't scale well - every time you add a new player, every player needs to send him their commands. You're not going to be making an MMO RTS using P2P.

This setup (sending only commands using P2P) is how most RTS's, including Starcraft, C&C, and AoE work, and is the only way AoE could possibly support 1500 units on a 28.8kbps connection. 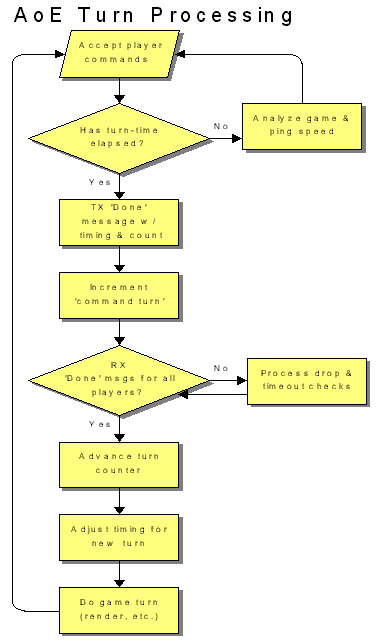 Here are a few more tips for writing a P2P RTS:

I've made a TCP-networked RTS, in which I passed the commands themselves, rather than the results of the commands. For instance, a player gives a move order. If the move order is valid according to that client, it is sent to the server. The server then sends it back to all clients, who validate and execute it.

So all client machines run the game themselves, the server code accepts messages and sends them back to all clients. If a client gives a move order, it won't start executing it until it is received back from the server.

The server sends a 'tick' number at which to execute the command as well, which is a few ticks ahead of the 'current' tick. This way all commands can be executed at the same 'tick' on all machines.

One benefit this method is that it doesn't depend on any individual client machine to validate the command. If I passed the results of the move, I might be able to hack it to move my units faster. All clients have to execute the same command and if one machine executes it differently, it will be obvious.

Validating the command client-side before sending it to the server isn't necessary, but in theory it saves network traffic. I used the same validation code to tell the UI that the move was possible, so it didn't require writing extra code.

As for what the messages might look like. I wasn't concerned with ultra efficiency as it was my first networked game. I passed commands as strings. The commands would be formatted like this: "<player_id>:<command>:<parameters>"

Then the clients would all execute this command when tick 153238 is executed.

269
When should I use a fixed or variable time step?
39
How can I make a peer-to-peer multiplayer game?
10
Networking in real-time strategy games
2
Is there a library or a framework that handles networking in an RTS?
3
Multiplayer tile based movement collisions cause client prediction to fail
2
Online RTS Game Architecture for Mobiles