Issues with Polygon Fixtures in Farseer

I've been working with the Farseer Physics Engine to try and build a simple 2D, sidescrolling game. Creating basic rectangle blocks worked easily enough, but I discovered when I tried to create some very simple triangle slopes that my existing 'character' avatar would not collide with them. This baffled me for a while until I began using the debug view to discover that while the body of the triangle appeared where I had placed them, the fixture which determined collisions was offset, as shown below (The debugging view is itself offset from the actual sprites because I'm clearly not smart enough to figure out the proper projection matrix): 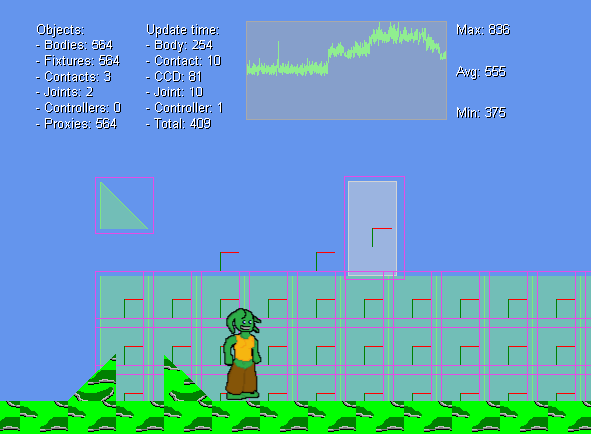 It turns out that whatever coordinates I give for the center of the triangle, the fixture appears at (2x, 2y). For example, in the attached image, there is a triangle sloping up to the left at (-4, -1) in the game's coordinate system. The fixture (light green triangle bordered in magenta) is at (-8, -2).

I know this has to be a simple mistake I'm making, but damned if I can figure it out. Here's how I create a new slope in the level:

The position parameter is given to be the center, thus the 0.5 offsets to create the triangle's edges.

Any insight would be greatly appreciated; this engine seems powerful but the documentation is definitely lacking.

You are creating a body and attaching a fixture at body-local position e.g. (10, 10).

Fixtures are always specified in body-local space; they should be roughly around the (0, 0) area regardless of where you intend to move the body.

Not the answer you're looking for? Browse other questions tagged box2d farseer-physics-engine or ask your own question.