Determining the first future intersection possible between ships and a planet

Somewhat of an extension of this.

I have a ship being launched from a planet, and I would like it to travel at a constant speed and direction such that it intersects another planet the soonest that it can. 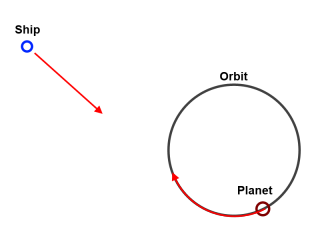 Using some quick maths I created a function! The function determines the smallest fly-by distance from the ship to the planet over time if the ship were to take the optimal route (a linear route since there's no gravity). So by determining when the fly-by distance is 0 (when the paths of the ship and planet intersect) I can work backwards to easily determine the angle of which I must launch the ship at to achieve this. 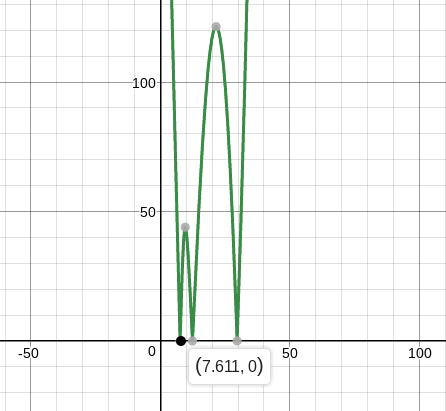 I created an implementation of the Bisection Method to find the first root of the function but depending on the variables of the function, the bisection method isn't the best solution to this problem. So now I'm trying to solve it mathematically! This is essentially what I need to solve:

Any solutions or ideas are greatly appreciated, thank you!

This means I want to find the x-intersection of the function nearest to the origin.

If you're interested in playing around with this function, I graphed it in Desmos https://www.desmos.com/calculator/tdtzt1gqkl

r_0 radius from the planet to the sun ("magic" units)

s_0 angular speed of the planet (clockwise radians per second

s_1 speed of the ship ("magic" units per second)

f(x) net distance from planet to ship at x time

I don't think a purely analytical solution to this is possible.

Any way we slice it, we have part of the problem in polar coordinates and another part in cartesian coordinates. So we end up trying to find an intersection between a line or curve and a sinusoid/periodic trig function. If the line were a constant we could use the arcsine/arccosine/arctangent functions. But unfortunately we're dealing with curves or lines with slope so no standard function gets us what we need.

In a previous answer I showed how we can solve this to within the needed accuracy by binary search. But since you've specified you don't want to solve it that way, let's see if we can reframe our problem differently.

First, to simplify our math, let's apply some (reversible) changes of coordinate system and units. 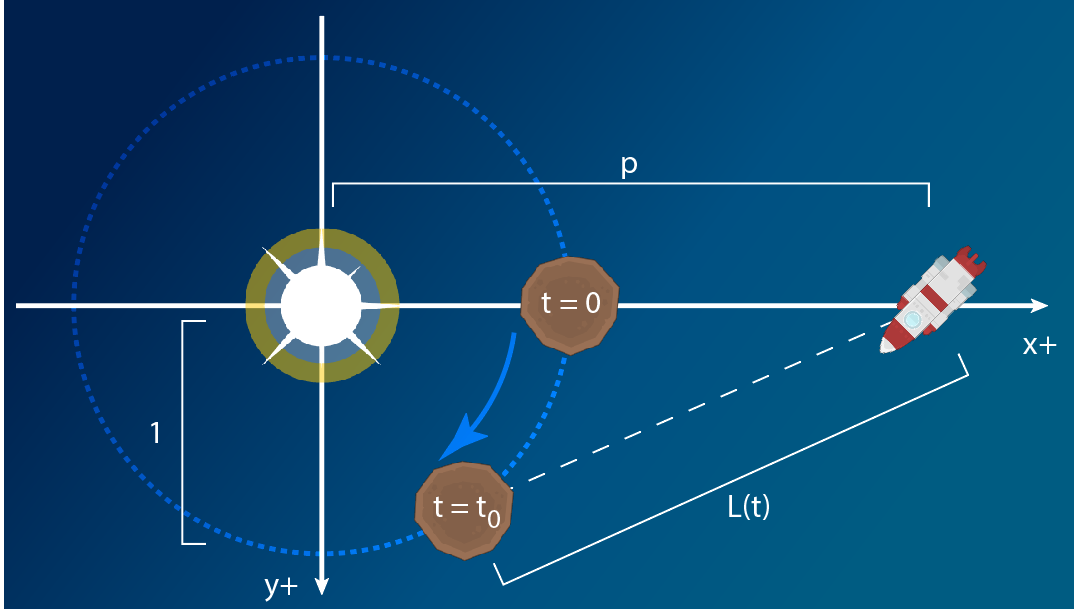 So our parameters are:

We're interested in the function L(t), the distance from the ship's start position to the planet.

And we want to set this equal to the distance the ship has traveled by time t > 0,

Which we can rephrase as:

Which is "just" an intersection between a parabola and a garden-variety cosine wave (unscaled, unshifted).

Take the parabola side of that equation and call it P(t). We know we can't possibly have an intersection before P(t) drops to less than or equal to 1, so we can use the garden variety quadratic formula and find the greater of the two solutions P(t_low) = 1 to get a lower bound on t.

We know the cosine wave rises back up to 1 by t_high = ceil(t_low/2pi)*2pi, but the parabola is strictly decreasing, so our earliest intersection must lie between t_low and t_high, at most one wavelength apart.

Unfortunately this seems to be about as far as a pure analytical approach can take us, and we're again forced to use some type of iterative root finding method in this span, but at least we've reduced it to about the simplest case we could hope for. There could still be multiple roots in this span, but our bounds are tight enough that this should be rare.

If your planet orbits much faster than your ship moves, the parabola will be nearly flat in this span and you can closely approximate it as a constant, using acos to find a very close first guess between t_low and t_high. Or if your ship travels much faster than your planet, the parabola will be nearly vertical the solution will be quite close to t_low. For intermediate cases like the example above, you might be able to approximate each curve as a straight line and iteratively refine from there.

The ship's x position can be expressed as x = vcos(theta)t, where theta is the absolute value of the ship's angle below the horizontal.

The ship's y position can be expressed as y = vsin(theta)t.

The planet's x-position can be expressed as sqrt(1 - (y - k)^2) + h, where k is the translation of the circular orbit from the origin of the coordinate system.

To make this a system of equations, the arc length traveled by the planet from a_0 to a_0 + theta is equal to s_0t(2 * pi * r). Due to the same-side angles theorem, this theta is the same as the ship's theta below the horizontal.

The arc length can be given by the equation: Assume o is theta for the rest of this answer.

After solving for t, substitute t into the two ship-position equations to get the x and y positions of the collision.

Not the answer you're looking for? Browse other questions tagged mathematics collision-prediction or ask your own question.

23
How can I Intercept object with a circular motion
6
How to “aim ahead of” an object moving in a circle?
0
Dealing with curved lines in GJK

50
Moving ships between two planets along a bezier, missing some equations for acceleration
11
How to calculate the vector of an interception?
0
Integration error in high velocity
7
Path following with Asteroids-like movement. Time to complete path
1
Calculating the vector to catch a falling object
2
Logical math behind jumping in a 3D world
0
Delta time causing comparison issues due to floating points
0
Calculation of distance while switching between two speeds
0
How can I match the delta rotations of two objects?