I wrote a small JavaScript implementation of the Diamond-Square height map/texture algorithm and the result is much more industrial-looking than I expected. I can trace a diamond pattern throughout (maybe I should have expected that given the name? 😉 ).

Any idea what I could be doing wrong? 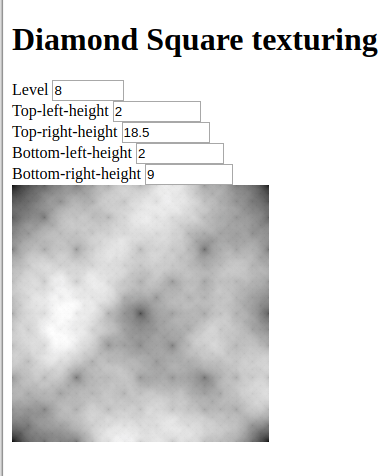 Your code cites the Wikipedia article, which in turn has a section called "Artifacts and Extensions" that observes a potential problem:

The diamond-square algorithm was analyzed by Gavin S. P. Miller in SIGGRAPH 1986 who described it as flawed because the algorithm produces noticeable vertical and horizontal "creases" due to the most significant perturbation taking place in a rectangular grid.

The grid artifacts were addressed in a generalized algorithm introduced by J.P. Lewis. In this variant the weights on the neighboring points are obtained by solving a small linear system motivated by estimation theory, rather than being fixed.

Some of these artifacts are present in the example image on Wikipedia. Here's the original image & a copy where I've flagged some of the artifacts. I marked 'high artifacts' in yellow & 'low artifacts' in pink: 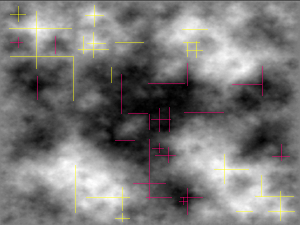 I did the flagging by free hand, so they might be off by a few pixels here & there, but we can noticed some trends: the artifacts tend to manifest as horizontal & vertical lines & the lines tend to align with each in a grid pattern. Your are also grid aligned, but tend to show up as lines cutting at 45 degrees. So I think there's something else going on here. If I understand your code correctly, it looks like you're doing a diamond step & a square step for each level - my understanding is that the diamond and square steps are supposed to be performed alternately.

Not the answer you're looking for? Browse other questions tagged textures javascript procedural-generation terrain heightmap or ask your own question.