Blender 2.5 - Using a Bezier Circle to set Bezier Curve as the Bevel Object

Around 5:40 (ish) in the video, he adds a Bezier Circle. He then adds the existing Bezier Curve as the Bevel Object on the Circle. This makes the Curve go around the circle creating the 3D chess piece.

I'm trying to do the exact same thing, but it's not working. I am using Blender 2.5 however too. When I set my curve to be the Bevel Object of the Circle, my Bezier Circle is just becoming a larger gray disc of goo. I was expecting it to be a 3D chess pawn.

You can see a screenshot of what mine looks like:

Before Bevel Object is Placed

After Bevel Object is Placed

Thanks in advance, Andy

Just realized that when I set the Bezier Curve handles to "Automatic" using the V shortcut (only for Blender 2.5), then my Circle no longer imitates the 3D curve. I need Automatic I think in order for the Bezier Curve to not be wavy. With Automatic, it does a slight curve directly from point to point. Thoughts?

Blender is really picky when it comes to curve orientations and mostly doesn't do what you would expect. Your chess piece should have the same orientation as the circle, eg. don't rotate the bevel shape in an upwards position, rather keep it on the same "plane" as the circle, as shown in this image: 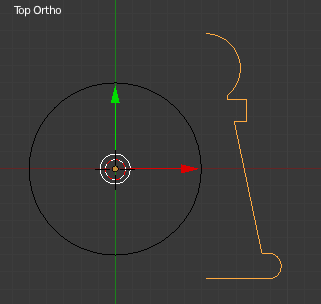 Rotating your "BezierCurve" should already have a visual impact on your chess-piece. Then you just have to go to edit mode (chess-outline) and modify the offset of the curve to the origin, so that the chess piece actually begins to look like one :)

Not the answer you're looking for? Browse other questions tagged blender or ask your own question.

6
How can I see the height of an object within Blender?
0
Unity3D - different object with the same mesh imported from Blender
9
Blender: How to “meshify” an object I made from Bezier curves
4
What is the simplest way to export a bezier curve created in Blender to a text file?
0
why is my mesh black in blender even though the color is set to white
1
How do I parent an object to a bone in the blender hierarchy?