What is the difference between body transform and root transform

Taken from the link you've provided:

The Body Transform is the mass center of the character.

So, when you animate a character slipping and falling to the ground, if you don't modify their Body Transform and only change the Root Transform, the animation will be played and the character will fall on the ground. The problem is, the body's center of mass is a feet or two above its body now, and if it interacts with and other physics object, it will act as if it's body mass is in the air.

Let's keep going in this example, your character is on the ground, but it's center of mass is still in the same place:

Now, in this situation, the car will still hit the body, and the body will still react, but it will spin around its center of mass, because of the force applied on it: 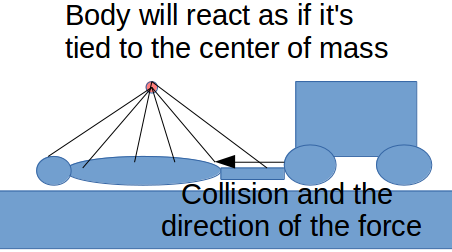 Now, we should see the body spin around its center of mass. I haven't tried this exact scenario, but it should be how it works. Just try it out in Unity (I will do the same and update the answer with results as soon as possible).

Not the answer you're looking for? Browse other questions tagged unity c# animation mecanim or ask your own question.

0
Turn and point Animation not ending in correct position

2
Tips on combining the right Art Assets with a 2D Skeleton and making it flexible
1
Jumping with Mecanim synchronization
2
Animating feet seperately from the body
0
Unity: Animation With Motion Now running in place
0
When is transform width in code not equal to the transform width in inspector?
1
Updating transform position after root motion