Say I have a multitude of 2D polygons floating about on a plane. These polygons can have any side count and aren't necessarily regular.

Assuming I know absolutely everything about the polygons (area, collision point, location, velocity, rotation, angular velocity... etc) how to I calculate what happens to two polygons after collision?

I.e. what will their resultant velocities and angular velocities be after collision? 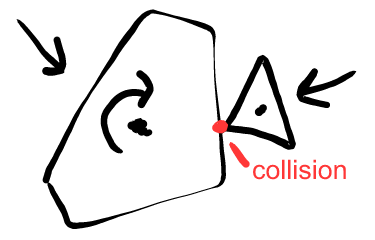 If not an exact solution, what resources could help me learn how to accomplish this?

This is kinematics, which allows us to deal with each kind of motion (rotation, translation) separately.

First of all, let's look at the what the new direction and velocity of the 2 object is going to be. We need the normal of the side the collision happens on to get the direction. Given the normal (yellow), the direction of object A (green object, green vector) and object B (red object, red vector) is (black is the original velocity) (the red object is considered static in this example. To get the dynamic-dynamic collision's result, do the same calculation twice and add the direction vectors together): 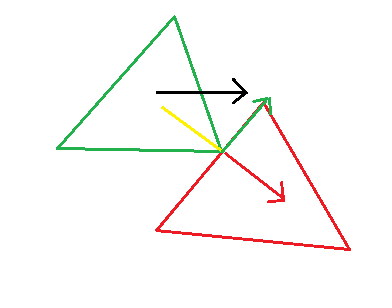 This should solve the translation problem, now onto rotation.

Every object has angular momentum, even if it doesn't rotate. It can be expressed as

where m is the mass, v is the velocity of the dynamic object (again, if both of them are dynamic, simply do these twice), r is the distance of the center of masses and theta is the angle between the vector pointing from the dynamic body to the static body and the velocity vector. You can simplify this to get an angular velocity:

Not the answer you're looking for? Browse other questions tagged physics collision-resolution or ask your own question.

1
How to add rotation to two particle collisions?

3
3D Ball Physics Theory: collision response on ground and against walls?
3
Need help with collision detection/resolution in a 2D simulation of 'worm-like' creatures
2
Bodies are colliding but refusing to rotate in Box2D
1
Simple (and fast) dices physics
2
How to make a stack stable? Need help for an explicit resting contact scheme (2-dimensional)
5
calculating torque from angular momentum considering inertia moment
2
Rigidbody2D Circular Orbiting
7
Why does physics not behave consistently in Unity?