I used Tiled Editor for making maps for my own game, I do not run any engine or anything. I have separated terrain layer and object layer in TiledEditor. 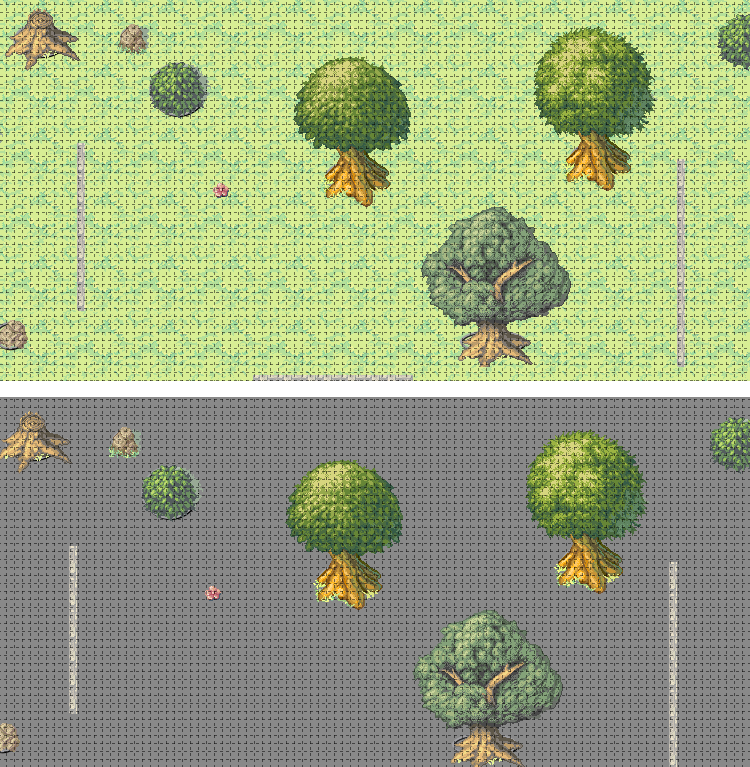 However I have problem with trees I want to make my character move behind the tree. But I have no idea how because even if it is different layer I am still rendering it by 8x8 pixel blocks.

Now my character is always on top as it is the last thing that I render.

But if I change the render order my character would be behind the tree even if the character will stay in front of the tree like this: 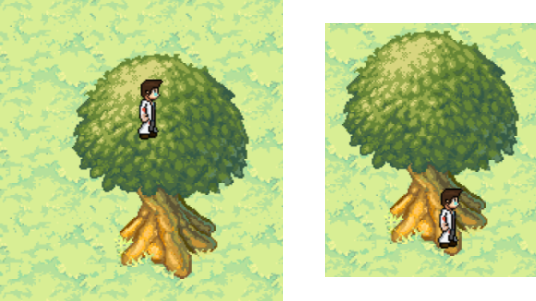 This is one of the main reasons why we don't use tiles for objects, like trees. Sprites are much easier to manage.

Anyhow, most engines, frameworks and APIs allow you to render the sprites based on a layer depth you supply to it. This value is usually between 0 and 1 by default, but it can be changed with projections. I'll use these values as a starting point, so if you have something different, then convert the values below to that system.

Take the normalized y coordinate, multiply it by 0.2 (or the size of the range you use), subtract 0.1 from it, then subtract the result from 0.5 to get the layer depth.

If the camera's coordinate system has a higher value the higher you draw something on the screen (like how most APIs do it), then do the following:

Do the same as with the last case, but add the result to 0.5 instead of subtracting it:

Not the answer you're looking for? Browse other questions tagged movement objects depth or ask your own question.

1
How to make one solid object in Maya?
14
How to gain accurate results with Painter's algorithm?
3
Frameskipping in Android gameloop causing choppy sprites (Open GL ES 2.0)
3
Layering with slopes in Unity 2D isometric scene
0
I'm trying to make another object move, besides from the character
1
why won't my character move