How to rotate a rectangle body around a fixed point?

How to rotate a body around a point? The body has x, y, speed and angle. Coordinates of the body relative to its center. Additional conditions: point position and distance from body to point. 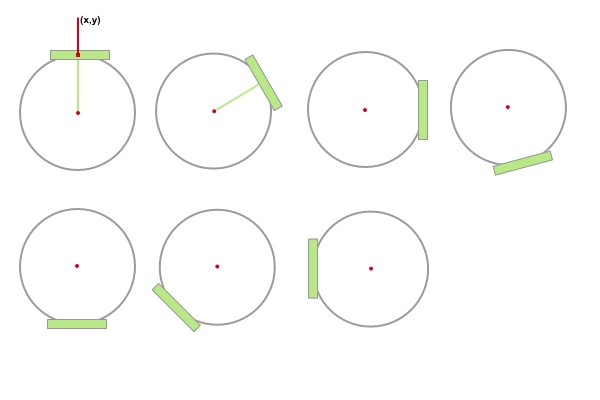 First off, you have redundancy in your state.

It is enough to track:

from this you can determine:

To rotate it with timestep dt, you would do:

Note that instead of defining the body's rotation with an up-vector, you could use an x-vector, or even just an angle, which in your problem is the same as the angle with which the body is rotated around the centre. But when drawing your object on screen, you need a frame with two axes anyway: an x-axis and an y-axis (object's up vector.) As the axes are perpendicular it is easy to derive the x-axis from the y-axis by simply swapping the components.

Not the answer you're looking for? Browse other questions tagged mathematics body or ask your own question.

30
Moving an object in a circular path

3
How do you get an object to orbit around a certain point on a 2d plane?
1
Rotating image around a given point
1
How to rotate an image around its own center in AndEngine?
0
Rotating point around another point
1
How To Rotate A Vector around A Pivot Point
0
Rotating Sprite Around A Point Without Messing Its Drawing Point
0
Trying to rotate a point around another point and it's not working