How can I call two functions in a sequence with onclick?

I have two functions, one that transitions to a new scene and the other one is the button animation.

I add both functions to the onclick of a given button. I assume it calls both functions at the same time and executes the transition without running the animation.

I want the button to run the animation first (I'm using DOTWEEN) and once it's done to execute the transition.

Unity generally does not execute "two funtions at the same time", because the game logic is single-threaded. What likely happens is that the function which starts the button animation is executed. The actual animation happens in a coroutine which would be processed throughout future updates.

What you actually want to do is start the tween coroutine and then do the scene change when the tween coroutine finished. The Unity UI system doesn't know about the tween you are doing, so it can't know when it will be finished. That unfortunately means that you can't cleanly separate these two functionalities (animation and scene-change) because the second depends on the first being completed.

To do something when a DOTWEEN tween is finished, pass it as a callback method to the OnComplete method of your Tweener. More about this in the DOTWEEN documentation under "Chained Callbacks".

You can simply animate button using Button Transition.by default, unity is selected with Color Tint, change it from Color Tint to Animation and then you can use OnClick to translate new scene. 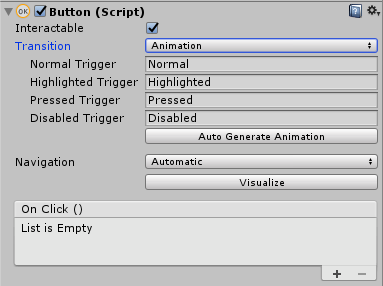 you can do simple animation for the button in Unity animation

Using Unity animation is better than DoTween and it's easy for small animations.

0
How can I make animations "snap" between transitions in Unity?
2
Unity and the problem with calling functions from other scripts
0
How can I attach a script to a GameObject prefab at runtime?
1
How to solve conflicting OnValidate() functions
0
Persisting score when restarting level after a rewarded video ad
0
With Google Admob, how do I handle two different rewards for a rewarded ad?
1
Unity UI - Make text come out and go back in