I'm in the process of redesigning some of my state management code (there are several features I've grown to dislike in practice..) which was based on this tutorial and others. The issue I'm having right now has to do with state transitions.

Where and when should state transitions occur? Should they be executed immediately, or should they be delayed to the end of the current frame, after the current state has finished its work for that frame?

Let's say my states can implement handleEvents, update, render, pause and resume methods, among others that are not relevant for this question.

My thoughts so far are the following:

The second options is more appealing to me, because as a player I would probably notice that extra bit of movement after pressing to pause the game. What if the player died during that frame? The delayed state change would be unwarranted. But then, the game state itself should probably disable updates if a game pause was requested.

On the other hand it might make more sense to delay state transitions to after the current state has fully executed its functions for the current frame. Maybe the Pause state should be a sub-state of the Game state and not a state of its own.

Is it simply a matter of preference or is one of the approaches clearly superior for a different reason?

I generally try to have a single location where the state can change: from the update() method of the state. This allows to see quickly where one state can go from there. This means that even if you have an event (in handleEvents) that would make it change state, delay that until the update().

And I generally use a hybrid method: delayed switch.

Something that I have not seen mentioned in the tutorial you've linked to: onEnter and onExit methods. Each state has some code that needs to be executed once when you enter it, and once when you exit it. For instance: the graphics/data that need to be loaded/unloaded for that state, etc. should be done in these methods. The update() method is there for what's done every frame. I call it the 'steady-state' (yeah, that's a lot of "state").

Here is what I usually do; first the classes: 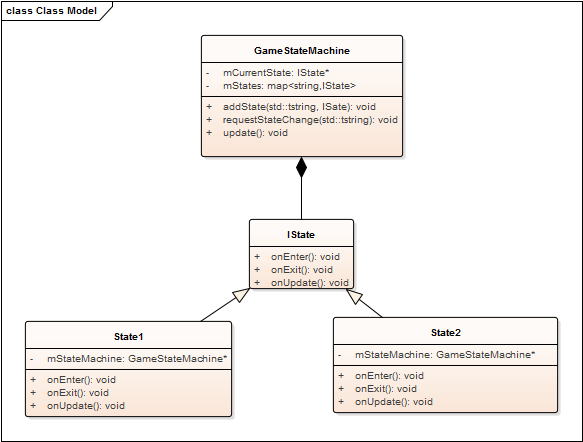 and here's how they interact: 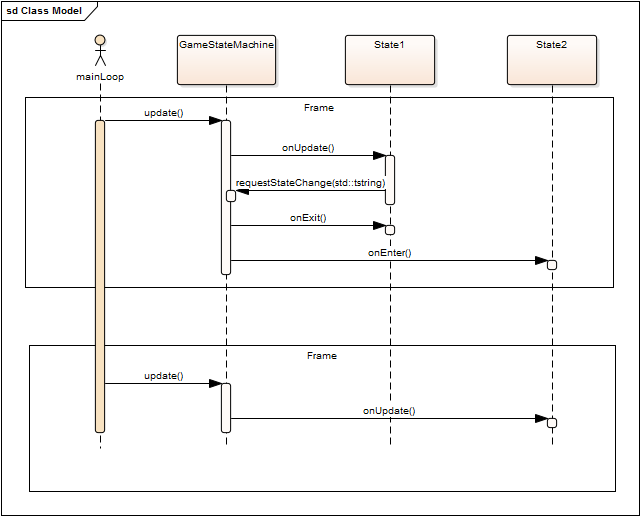 But it does not just change the states. Before doing so, it calls the onExit method on the current state, then changes the state to the new requested one, then call the onEnter method on the new (now current) state. This way, the next frame will be in a 'steady-state': no initialization to do, no set-up to do, and your 'render' method will correctly display stuff that relates to the new state, even if no update has been done in this new state yet.

Not the answer you're looking for? Browse other questions tagged c++ architecture state .