How would you implement the hearthstone flying particles? like you can see here These are not just simple particles flying from a to b... I think that they are flying in some random spline, and stretched...

Any information, even to something similar that you can point me to would help! Thanks

It certainly looks like you could use splines to get similar paths. I fired up Krita & made a few to help illustrate some things that might help get you going. 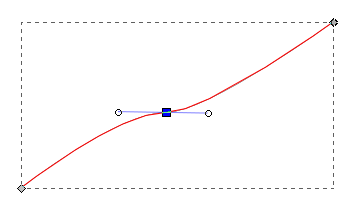 The spline above goes from one corner to the opposite, passes through a somewhat central middle node. Note that the control handles that node are less than 45 degrees off from the angle between the end points, are symmetric in length & have lengths that fall within the bounding box of the end points.

Let's experiment with those parameters a bit. Here's what happens when we push the angle to about 135 degrees. Note that the shape gets a bit more of a pronounced S curve: 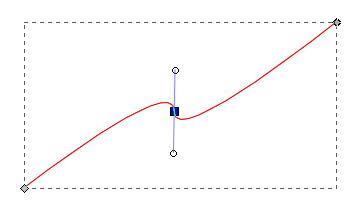 Next, let's push the controls outside the bounding box. Not that the S curve becomes even more exaggerated. 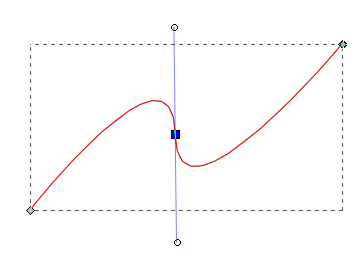 Finally, let's break the symmetry. In this final example, the lower handle barely escapes the bounding box, but the upper handle is about twice the length of the lower one. Of the four, this one probably has the most personality. 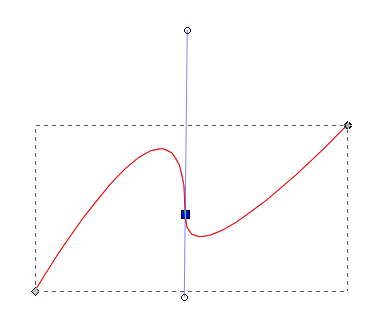 I recommend that you grab whatever graphics software you want that supports spline editing, make copies of a 'default' spline & edit them in different ways. You'll probably hit upon a couple of things that looks reasonable much faster than if you were going directly to your code. After you have a few promising recipes, try them out. Maybe try a few 'bad' ideas as well - sometimes things look different when animated. Either you'll happen upon some hidden gems, or you'll refine your sense of what's not going to work out.

Not the answer you're looking for? Browse other questions tagged particles .

12
Drawing particles as a smooth blob
0
How can I keep straight alpha during rendering particles?
11
How to do the Geometry Wars gravity well effect
0
Particles placed in the middle of the screen (OpenGL ES 2 / Android)
6
overlapping 3d particles not blending nicely when at the same z
13
How to implement soft edge areas with particles
2
Touch drawing in the dirt
1
How can I spawn particles around a point but inside a box?