How can I make bullets come from a character's eyes, but look like they come from the gun?

How can I make bullets in a first person shooter look like they come from the gun, but actually come from the eyes of the character? The problem is that since the camera (the character's eyes) are in a different position than the gun, bullet animations coming from the gun won't end up at the crosshairs. This guy manages to do it, and it's more obvious at 5:17 when the bot is shooting at him. This also happens in CS:GO

I was thinking that maybe the final destination of the bullet is calculated, and then the path is traced backwards to the gun from there, but it's just a guess.

The reason that bullets coming from the gun don't work with the cross hair is because the cross hair represents where the bullet would go at an infinite distance.

You can't make the bullet look like it comes from the gun but actually come from the eyes without causing some problems. Specifically, where the bullet looks like it's going and where it hits won't be the same place.

Here's a set of illustrations that show how/why I say this... 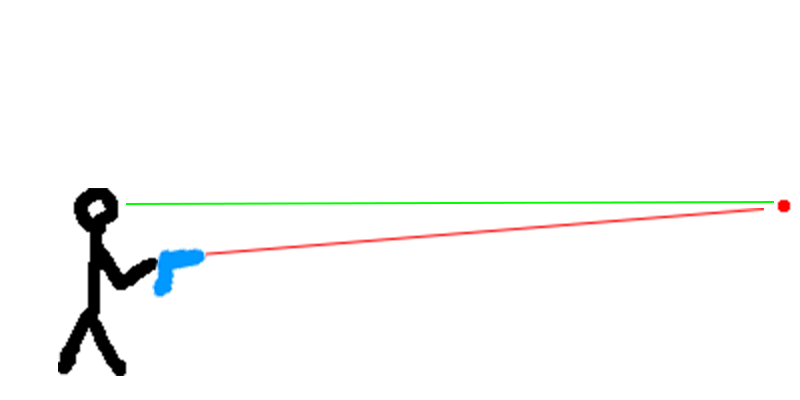 First, this is a representation of a player shooting from the hip. The red dot represents where the cross hair aim point. The horizontal green line is the view from eye to aim point (through cross hair). The red line coming from the gun is the actual bullet travel line. 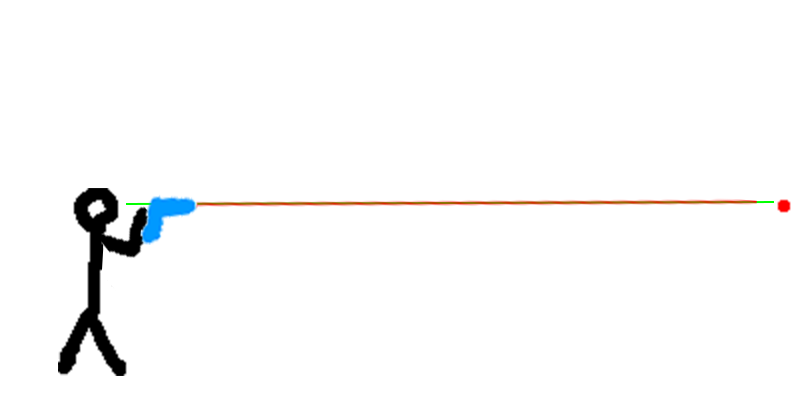 Here is the same setup if the shooter is holding the gun up (iron sights). This is what's happening in the example you reference in the video at 5:17.

Now let's go back to the first case, but add a target that's in front of the player, and fairly close. 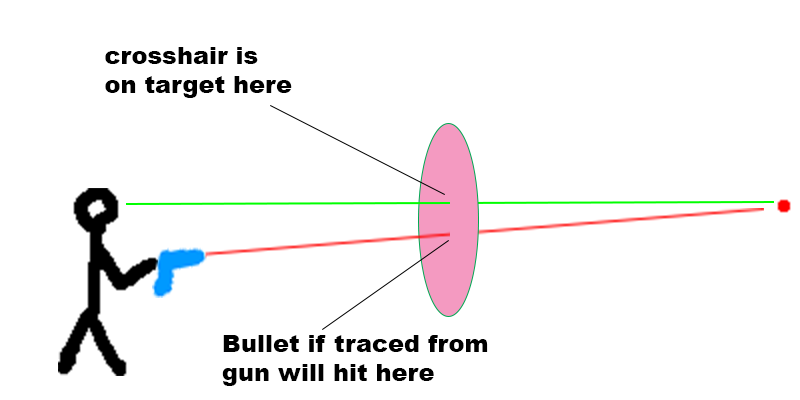 You can see now how where the cross hair looks like it's targeting and where the shot hits isn't the same. And that's a problem, because it might actually mean a miss if the hit boxes are more complex, or if you are rendering a hit decal at the impact point. Either the player shoots at what looks like a perfect target and misses, or the player shoots and hits, but the hit indicator isn't where they shot.

But of course if they are holding the gun up to their eyes (iron sights), it's just fine... 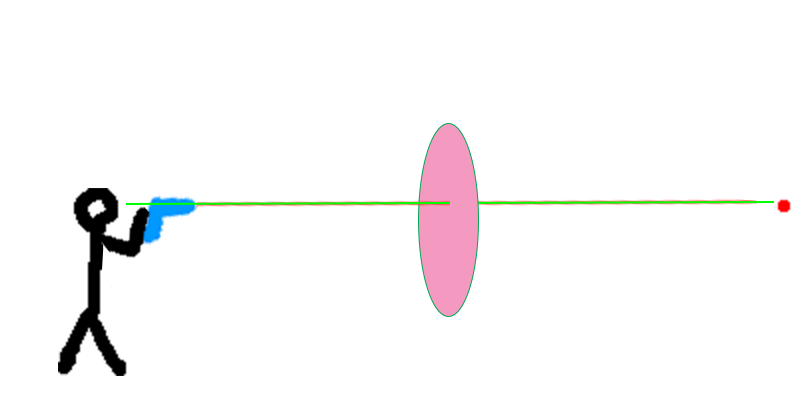 First, here's the problem we want to solve. We want to hit the spot that the cross hair is on, like this... 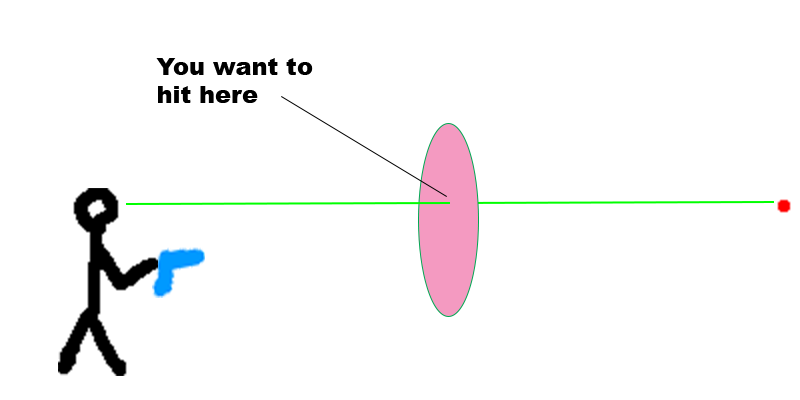 Once you have this point, there are two things you should do.

First, when you draw the streak of the bullet, draw it from the tip of the gun to this newly calculated point... 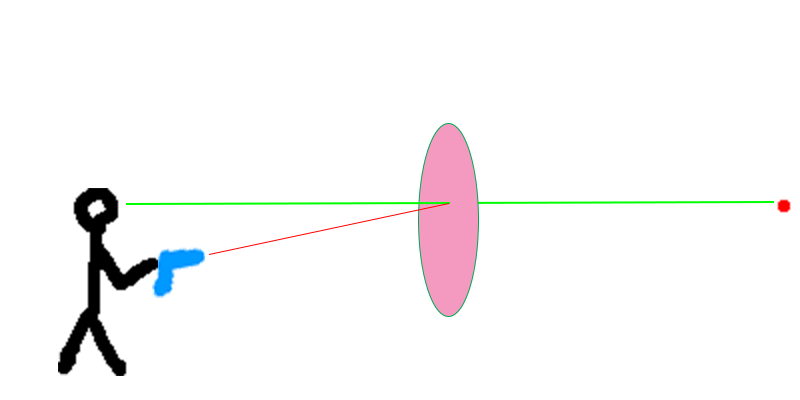 It's not super clear in my illustrations, but the problem is though your gun isn't quite pointing the same way as the shot. And the closer the target is to you, the worse it will be. So the second thing to do is rotate the first person gun model up a bit so it's pointing at the impact point, like this... 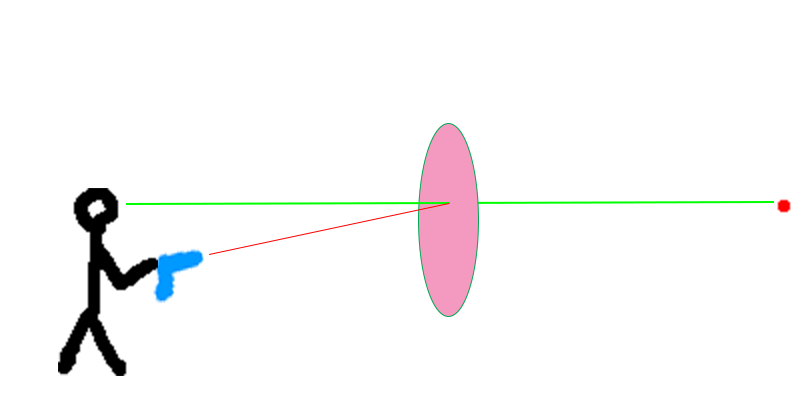 And now, everything is all good!

It might look a little bit off if the target were literally right in front of the player - like if they were face into a wall. You can actually fix this by having the player lift the gun up more as the target gets closer, so the rotation is less.

Alternate Solution If the gun has a laser sight, then you will always be calculating that point where the laser (coming from the gun) illuminates the target. When the player shoots, the bullet hits where the laser sight is. It is maybe a little disconcerting that the cross hair and the laser illumination dot aren't in the same spot, but it does help a bit.

You just need to use basic geometry.

Then you get the direction vector by

Now you can spawn a bullet in the position of the muzzle with that direction vector.

Having that time you can play around with bullet spawning, special effects, sound, etc.

Hope it helps. Update the question and comment if there's anything else or unclear.

It's relevant to note that most games do not use the bullet object to detect hit, as bullets move in very high speed and are expensive to check collisions with.

Instead, animate the bullet coming out in a way that looks good and calculate the hit point by using something like a raycast.

That way you won't face the problem highlighted on the other answer that involves the reticle being at the infinite distance.

Also, while this may seem like it can only work for instant shooting (the bullet travels at infinite speed and hit all it's trajectory at once). However, you can shoot these days with limited length and every x frames you can angle the shot down (to simulate bullet travel) and send a new raycast.

Important to note, this "angling down" is just in the variable space, the visual of the bullet does not matter for this.

15
Shooting the bullet out of the gun instead of the camera, yet keeping it accurate with respect to the reticle
5
FPS Crosshair, Should it be drawn on center of the screen or to the forward of bullet spawn point?
0
First Person Shooter Character in Unity - Meshes Clipping When Close to Body?