I've been attempting to create some procedurally generated paths for a while now, but I've reached a problem when it comes to generating the intersections of the paths.

The paths are currently "extruded" along a catmull-rom spline, I used a bezier curve before but catmull made the whole process of placing the points easier.

My plan is to have all of the path nodes as part of one big graph, so that each node has edges to other nodes. This way it will be easier to do pathfinding on the paths later on.

Here's an illustration that kinda shows what i want, think of existing games like the roads in Cities skylines: 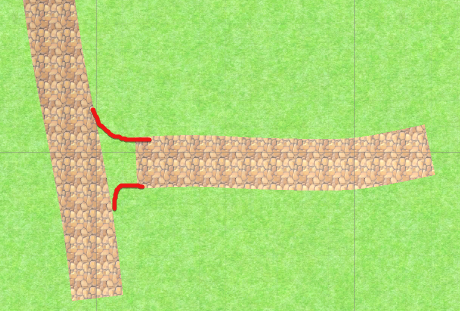 I've read something about creating a polygon from all of the closest vertices of an intersection, and the triangulating that polygon. but i fail to see how i would get the right vertices from the mesh, without having to calculate the distances for each of them to the intersection node.

I also stuck on how to generate junctions, however, I kinda have a solution to this.
I'm assuming that your graph is a planner graph which is probably has to be.

Step 2: You generate all the segments based on the segment half-width and you offset the first and last ring by the junction half-width.

And you should have a nice path.
If you found a better way please update.

Not the answer you're looking for? Browse other questions tagged unity c# procedural-generation 3d-meshes graph or ask your own question.

8
How can I incrementally generate an graph?
7
How can I create or extrude a mesh along a spline?
4
Controlling roll rotation when travelling along bezier curves
4
Calculate edge loop from plane intersection
2
Room generation with external walls and doors
7
Mesh generation for procedural city generator
1
Consistent normals at any angle in bezier curve
3
Procedurally splitting and merging paths
1
My vertex cache for reusing vertices in marching cubes algorithm in unity fails for one case, but I cant figure out what case