How to determine if the player between two points?

But I'm having trouble with the first step. If the rail is more than two points how do I determine which two points do I use for lerping?

You must find the grind segment that's closest to the player.

The first thing you need is a function to find the closest point on a segment as an interpolation value of 2 points we'll call i.

Note: You may want to check if length_squared is zero but we're assuming your level does not have any zero-length segments.

You can then find the exact point on the segment by doing Lerp(segment_point1, segment_point2, i); where i is the returned value of the above function (in red on the image).

But what we really want is the point on the segment clamped between 0 and 1 (in yellow), this is why the above function returns an interpolation value and not an actual point.

What you then do is calculate the distance between the point on the segment and the player for every segment (grinding edge) in the area and find the closest one.

Then if the closest distance is less than a grind distance threshold, you can snap to that edge. 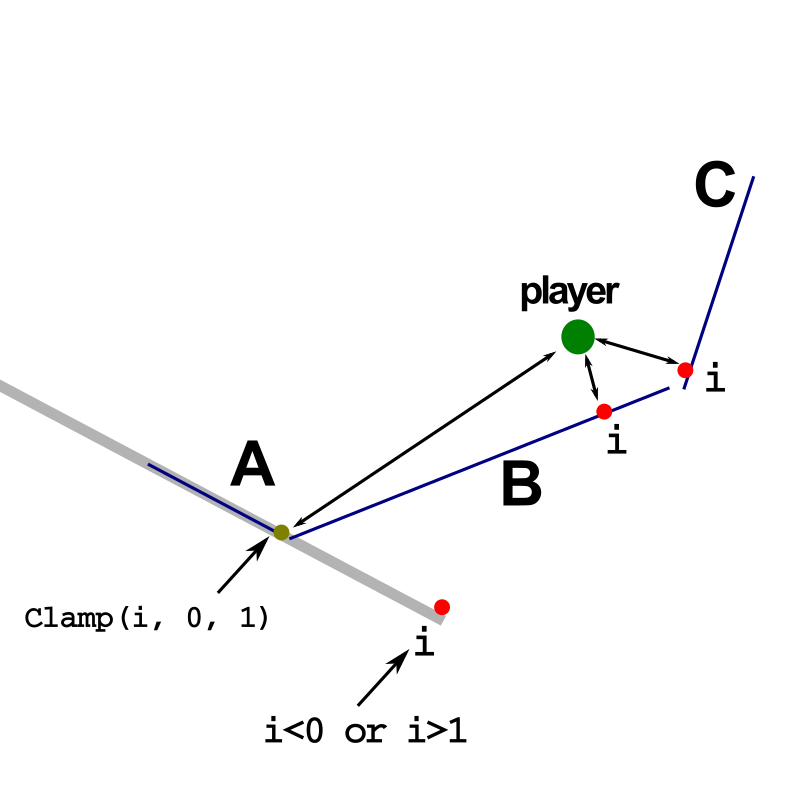 In this image, we'd snap to the B segment. (In gray is the extended segment A to show how i is outside of 0..1 for that segment before clamping)

Additionally for movement on the rails:

Make all of the points of any grindable rail part of their own array.

Use collision detection to see if a player is touching the rail (initiating grind).

Retreive the array and loop through each of its points to find the 2 points closest to the players point of contact, a simple distance check should suffice (keep in mind that circular grinds could create problems, depending on the distance between each point).

Use the characters speed and direction to do the rest, the path can be determined by the points in the array.

you can check the distances between the points in the rail compared to your skater, then whichever is greater than playerVector but closest is the next point, and whatever is lesser than it but least distance is the previous point

You will want to test if the player collides with the rail; and if so, snap the player onto the rail. 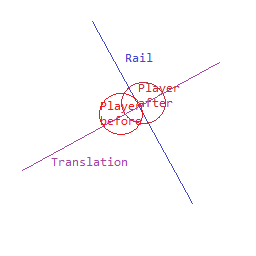 The player before being snapped to the rail:

The player after being snapped to the rail, with the plane of translation:

As the illustration demonstrates, the player must move to the center of the rail, while staying on the plane of translation. I don't know 3D geometry as of now, so I cannot provide the pseudocode for 3D.

Not the answer you're looking for? Browse other questions tagged vector linear-algebra .

5
Points on lines where the two lines are the closest together
10
Moving objects colliding when using unalligned collision avoidance (steering)
5
What is a good way to determine if a vector is between two other vectors in 2D?
2
Moving Unit Parallel to Mouse in TBS Game
1
Interpolation between two 3D points?
0
Lerp vs Vector math: one better than the other?
0
Distance between two lines (textbook answer vs practical application)
0
Having two points (line) how can I substract a specific amount to each point?
0
What is the signifigance of the Dot Product in World to Local Transformations?