Say I have a sprite. Its AABB is easy to find since I know the width and height. Say I rotate it 45 degrees, I don't think the AABB would be big enough to cover it, so I need a new AABB. How can I calculate the bounding rectangle of a rotated rectangle (given a center point, an angle, and its width and height)?

Note that OpenGL does the rotation so I do not have access to the vertex information.

What I'm trying to do is get AABBs so I can do 2D culling for rendering.

The straightforward approach is to

It's possible to perform the operation in fewer calculations, if you are concerned about (or interested in) those sorts of things. For example, one (potential) technique for doing so is discussed here.

Consider a box centered at some point in space. Imagine a line from the center to the top-right corner. This length is effectively the hypotenuse of a triangle formed from taking the center of the box and drawing a line right and then up. These sides of the triangle are half-extents. In the picture, the red lines are the half extents and the blue line is the hypotenuse -- the distance from the center of the box to the corner. Call this blue line's length 'dist' 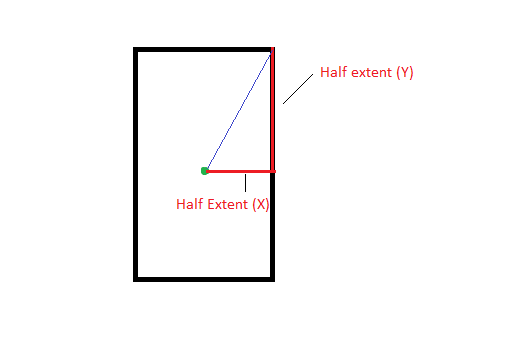 If you compute the arctangent of ratio of the half extents (Y / X), then you can get the angle. From there you can simply linearly add Pi/4 to the angle (45 degrees), then use:

Repeat for each of the four points, and then find max/min boundaries of the AABB.

This is super tedious. The better way is to use 3x3 matrix representing rotation and translation. In effect, you take each of the four points, translate them back to origin by subtract the center's coordinates from them so that their new center is on (0,0), then rotate them. Finally, you translate them back to the real center. With the new set of points, once again, simply compute new the AABB for those points. Wikipedia has some great information about matrix math, especially how to do rotations, translations, and more using 3x3 matrices.

Not the answer you're looking for? Browse other questions tagged rotation aabb or ask your own question.

4
Bounding box of a rotated rectangle (2d)
1
How to I get a rotated sprite to move left or right?
2
OpenGL Get Rotated X and Y of quad
6
Calculate an AABB for bone animated model
2
How do I rotate a bounding box together with a sprite?
2
LibGdx sprite rotation vs Box2D physics rotation problem
1
How to recalculate AABB after rotation?
1
How to get the center position for AABB of rotated mesh right?