I began to study 3D math and noticed about left/right handed cord spaces and clockwise/counterclockwise rules. I understand that left-handed use clockwise positive rotation and right-handed counterclockwise. But what i don't understand is way this rules exists, on what technical problem this decision is based or this is just an agreement and nothing more?

The reason is that "direction" or "clockwise / counter-clockwise" exist only in the interpretation of the numbers.

No matter what coordinate system we use, the math of operations like the cross product remains the same.

(Otherwise you'd have to remember to use different multiplication rules in each coordinate system, which would be even more error-prone and confusing!)

Let's try a simple cross product, between basis vectors on the positive x and y axes:

We get a unit vector on the local z axis. So "x cross y equals z" is what this tells us. Note that nowhere in there did we have to "tell" the math how the axes are arranged spatially. It doesn't care, it's just rules for manipulating numbers.

Now, when we try to interpret that result as a statement about 3D space in a particular coordinate system, that's where differences creep in. 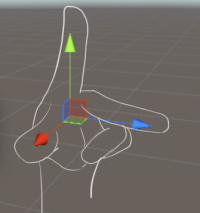 I can point the fingers of my left hand so that my thumb points right, my index finger points up, and my middle finger points forward, so I can think of this relationship we just calculated as:

And we can call this a left-handed coordinate system.

With the y & z axes interchanged relative to Unity's, there's no way I can contort my left hand to point in the new directions while keeping the same axis labels. But I can do it with my right hand: 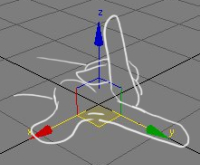 And the same rule now holds for my right hand instead:

Moving from one coordinate system to the other didn't change how the vector math works in terms of its numbers, but it did mirror the spatial interpretation of those numbers - turning a left hand to a right hand.

You got it backwards, the rotation direction defines the handedness.

Take both of your hands and point with your thumbs in the positive direction on the X axis. Now make an "OK" gesture with your hands without rotatong it, now the otjer fingers define a circle. If the fingers on the left hand point in the same direction as the direction of rotation around the X axis, then the coordinate system is left handed, otherwise it's right handed.

The same in a picture: 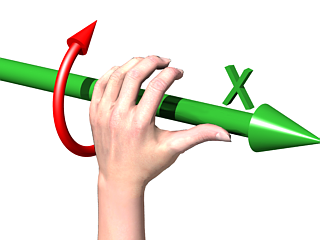 Not the answer you're looking for? Browse other questions tagged 3d or ask your own question.

6
Why / how does XNA's right-handed coordinate system effect anything if you can specify near/far Z values?
0
(XNA) 3D Model Rotation Angles
9
3D Camera Rotation
0
How to understand kind of matrix/world from implemented math operations?
0
directX rotation of a 3d cube inconsistent
0
Ended up with left handed coordinate system OpenGL but I need right handed
2
.obj file reader for DirectX 11
0
how do I move an object based on rotation of another object?