How do I test if an AABB and concave polygon intersect?

The player's collider is an axis-aligned bounding box in my 2D platformer, but the environment can be different shapes. I already have collision-detection that prevents the player from going through colliders, but I don't have anything for getting the player out of concave polygons if he ends up inside one by for example flipping the collider when changing direction from/to left/right.

SAT doesn't work on concave polygons, so I need an algorithm that can tell me if an AABB and any polygon intersects and give me the minimum translation vector to push the shapes apart. (The velocity of the objects will not need to be considered).

BTW the game is written in C# with the MonoGame framework if that's of any relevance.

If your game starts with the player AABB completely outside of the concave polygon, then I would solve an easier problem:

Test the edges (line segments) of the polygon against the AABB. If you have an intersection, just push out the AABB so it is on the correct side of the linesegment. 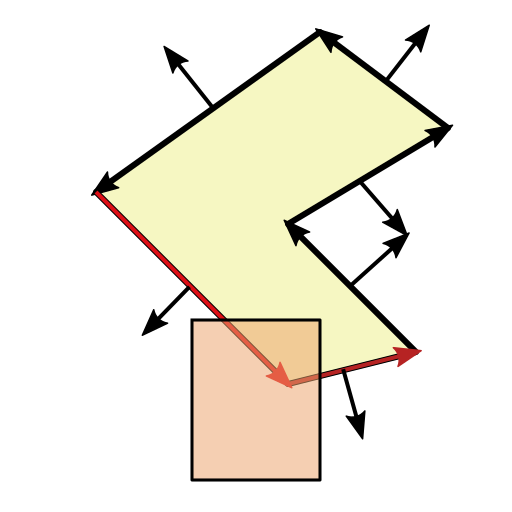 To do edge-versus-AABB in 2D, you can use the Cohen-Sutherland algorithm.

Intersecting a polygon P with a box/rectangle R is the essence of clipping, so you could use a clipping algorithm. There are several, e.g., the Cohen-Sutherland algorithm. A box R and a polygon P intersect if (and only if), when you clip P to the box R, the result is not empty, i.e., some parts of P are inside R.

Not the answer you're looking for? Browse other questions tagged c# collision-detection geometry aabb .

20
How do I test if a circle and concave polygon intersect?
8
2D Platformer Collision Handling
3
Movement and Collision with AABB
12
Finding the contact point with SAT
0
Degenerate AABB (axis aligned bounding box), does this always intersect?
7
How can I test whether points are within a polygon?
3
How to resolve collision between a dynamic AABB and static AABB?
0
Polygon trigger colliders for 2D platformer
0
How to Design a Generic Collision Detection System?