I'm making top-down race game in GM:S with Box2D, the car is controled in unusual way: player sets direction and engine's speed, and the car uses them: turns to the desired direction and reaches speed. But the question is about the "residual" speed after the turn. Here is what I mean: 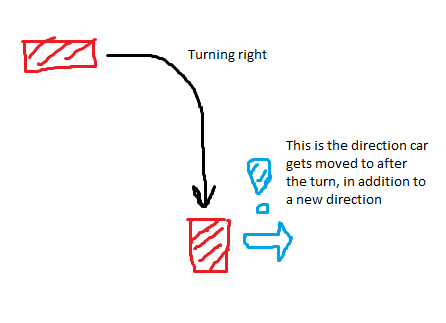 I make rotation by applying torque and move with applying force. I don't have tyres, it's just one plain object.
So how can I get rid of this momentum? I'm working in GM:S, but I'd like to hear any solution, I can adapt it easily.

Instead of using a Torque force to steer the car, apply force perpendicular to the direction it is traveling. This is very roughly how the physics actually works.

Torque forces and linear forces do not combine in this way. So using torque to turn is actually not affecting the forward force at all.

You may also need to manually apply a rotation to the car to keep it pointed the same direction as it is currently being moved.

I haven't worked much with physics in Game Maker, however, I'd look at the local physics functions.

With this it'd probably be easiest to setup three "forces" and apply them as needed for acceleration, left, and right turn.

Not the answer you're looking for? Browse other questions tagged physics box2d game-maker racing or ask your own question.

5
Problem representing torque as a quaternion
3
How do I move a 2D top-down racing camera smoothly and show what's ahead of the player?
1
How can I implement a “boost pad” with Farseer/Box2D physics?
5
Calculating torque required to turn an object to a target rotation, depending on timestep
2
box2d and constant movement
1
Confusing box2d forces
0
Realistically drivable car
0
PyBox2D car moves uncontrollably