How to gain accurate results with Painter's algorithm?

A while ago I asked how to determine when a face is overlapping another. The advice was to use a Z-buffer.

However, I cannot use a Z-buffer in my current project and hence I would like to use the Painter's algorithm. I have no good clue as to when a surface is behind or in front of another, though. I've tried numerous methods but they all fail in edge cases, or they fail even in general cases.

This is a list of sorting methods I've tried so far:

The problem is that a face might have a closer distance but is still further away. All these methods seem unreliable. 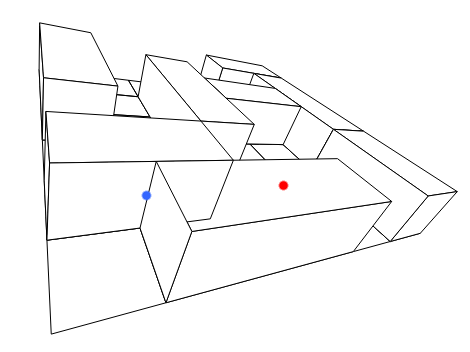 What exactly is used in the Painter's algorithm to determine the order in which objects should be drawn?

Usually the distance of the midpoint of a polygon to the camera is being used for z-sorting. The painter's algorithm cannot be 100% accurate by it's nature. There will always be cases where sorting will fail, no matter what reference point you use.

If you want correct z-sorting with the painter's algorithm, you'll have to slice overlapping polygons into smaller parts (eg. by using a quad-tree) and sort these parts individually. This can become quite heavy on the CPU though..

In such cases for me it always worked using bsp-trees. Split the scene until you have convex set of polygons in bsp-tree's node and then you can easily sort polygons within the nodes. Note that by sorting polygons from the bsp-tree node it seems like the same problem as you described above, but there is a condition not so obvious - after constructing the bsp-tree all the problematic cases are already solved - in node you should end up with set of polygons from which the convexity test must pass - if you pick a plane from one polygon from this set, the rest of the polygons are all either in front of the plane or behind the plane. Using that info makes sorting easy - the sorting functor takes 2 polygons - check in which half-space is the 1st polygon against the 2nd polygon and also check the placement of camera against the second polygon. The 1st polygon is visually behind the 2nd polygon if: * side(p1, p2) == infront && side(camera, p2) == behind * side(p1, p2) == behind && side(camera, p2) == infront There are however certain cases where above condition if called with (p1, p2) tells that p1 is visually behind p2, and if called with (p2, p1), tells that p2 is visually behind p1 - in such cases the order doesn't matter as the polygons don't overlap on screen from the camera.

Note also that the tests for determining the side of camera placement against polygons and traversing of bsp-tree are slightly different when dealing with orthographic and perspective projection.

If you cannot afford splitting of the input polygons, I think you are out of luck.

Not the answer you're looking for? Browse other questions tagged 3d algorithm objects face or ask your own question.

5
How does a BSP tree work for Z sorting?

4
Collision detection of convex shapes on voxel terrain
10
What exactly causes a surface to overlap another?
12
How do I determine the draw order in an isometric view flash game?
11
How to properly implement alpha blending in a complex 3D scene?
2
How to determine the visibility of a single vertex, given a viewpoint?
7
How do I resolve a sphere-triangle collision in a given direction?
0
Bounds Queries for Simplex Noise Function
10
How do I calculate paths for objects with limited acceleration?
1
How do you compute the tangent space vectors with normals given in the mesh?
8
How do I implement flat shading in GLSL?