How to instantiate GameObject on client without network?

When I NetworkServer.Spawn(ob) a gameobject and make it a child of a transform.parent after it spawns on both the server and client it usually lags, meaning it takes some secs to align with the transform.parent which is the player

Example : Instantiating a GameObject containing a ParticleSystem which gives the parent somewhat an effect, smoke or something in that direction, in the host client every object usually has a smooth movement where as in the connected client it goes very rough and slow, like every gameobject having a low fps except the main client player prefab

So i was thinking spawning the same effect on both clients so it wouldn't have to sync from the server to the client which uses it instead it only would have to sync inside the clients game, it might not have the same particle movements but it wouldn't make a difference 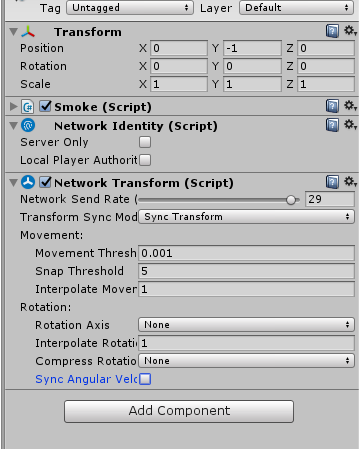 Here is the link to documentation about remote actions, that's what you need https://docs.unity3d.com/Manual/UNetActions.html

Just one more thing, in the image the UpdateRate are insane (29), i dont know what you are building but, probably you dont need this. It's a better idea reduce this number and add some interpolation in the rigidbody of you object if you need smoth movement.

If you just dont need sincronization you can simply put update rate in 0. Done.

Not the answer you're looking for? Browse other questions tagged unity unity-networking or ask your own question.

5
How do I Sync data from client to server?
4
Moving a character based on a list of Vector 3's
2
Unity 5.x Network Synchronization Concepts
1
Client not executing commands in Unet
0
How can I send commands to only certain clients?
0
Unity UNET, problems spawning and then destroying that instantiated prefab
0
Unity - Instantiate GameObject from client on Network
1
Issues using NetworkServer.Spawn with Unity and Mirror-Networking