How to find and send data about on-screen players to a client in a real-time multiplayer game?

I'm surprised I couldn't find much information on this.

I am making a top-down browser game in which the players see a small section around their player (see the image). Since the player doesn't need to render the players far away that they can't see, it would be unnecessary to send data about them. I want to know how the server should calculate who is near enough to the client that they appear on their screen and therefore receive data from the server about those players.

The way my problem differs from what I have found is that I need to track many players (at least 50 and preferably up to 100) and many can be on screen at one time (assume a maximum of 10 on screen at any one time).

Some assumptions/considerations that are made:

Initially I thought about sending data for all the positions of the players to each player but this seems like a terrible idea with so much unnecessary data being sent - from what I understand the server should be sending as little as possible.

My current strategy (shown in the image) is to have the server periodically (every second for example) calculate the distances between all players to determine those near enough to each other to appear on screen. For the next second, data will only be sent to the client regarding those near it. After the next second, new distances are calculated to decide what to send (and render) for each player. 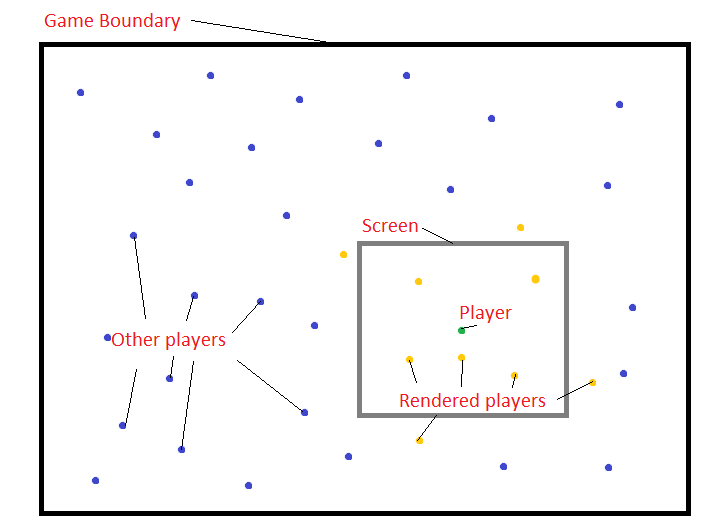 The main issue is the ability of the server to process all of this with everything else that it must already do. I am not convinced this is a very good way.

This is trivial for off screen entities in a single player game, however for multiplayer games with many players moving at once this becomes much more difficult.

How can I figure out what players are on screen efficiently and what data should be sent regarding this? Or please point me to where I can find information on this.

If you divide the game's map into different chunks then you can map each player's position into a separate data structure for each chunk where every other player a given chunk is visible to every other player within that chunk respectively.

The rest is really up to you (what the size of a chunk is), and in essence each player in a "chunk" or subsection gets the same data so you don't have to re-compute it every tick or so. This makes for constant time lookup and is nice since you don't have to do any distance calculations to check which players are visible for every other player since the size of a chunk will demarcate the region of visibility. This approach is basically quadtrees and games like Minecraft use this approach.

Also, you may not want to send n(n-1) packets each frame for n players regarding every other player's n positions necessarily if you're concerned about performance too much. The best approach may be to fit all of this data each tick into one giant packet containing the positions of every other player within the same chunk as the player you're sending position data to, so there are as few send() calls as possible (then again, this may not be a huge performance hit either in practice depending on the game). The size of one packet in this case is upper bounded by the num of players in a chunk * size of player packet.

In the worst case there could be 100 players in one chunk in your case, but it's up to you how you divide the map. The smaller the packet the better, and a packet can be up to 1500-65,000 bytes in size so you shouldn't have a problem unless you're dealing with thousands of players/poor network speeds. This is completely dependent on how much data is represented for each player, and how many players there are.

EDIT: But yeah, I wouldn't be concerned at all with sending data for players that aren't visible at all using this approach. It's very practical to send all of surrounding chunks in a game if they have the potential to be visible depending on the size of a chunk compared to your screen's size.

Not the answer you're looking for? Browse other questions tagged javascript multiplayer client-server node.js realtime .

4
How do I synchronise real-time moves of players on a grid?
8
What data should be cached in a multiplayer server, relative to AI and players?
8
What data to exchange in multiplayer real time games?
3
What sort of data should be sent for mouse-based movement in a multiplayer game?
0
Approaching syncing between client and server, in a Tower Defense game
25
What to send to server in real time FPS game?
1
Client Tells Server What Gamestate Data to Send Back
0
Google Play Game Services real-time multiplayer secure game data architecture
3
Multiplayer game, design of server <-> client communication