How do I get the distance between 2 points on an isometric grid?

How do I get the distance between 2 points on an isometric grid? I'm creating a facebook isometric game (in as3), and when I move around a particular type of building, I need to know if it comes within range of another type of structure, for example a tree. I tried taking the grid x,y points for both items, and calculating the x,y from that but it doesn't seem to work.

There are a lot of ways to compute distances, every dot product can be used: a looot of ways.

Once you know the position, you can use the Euclidean distance in the canvas' coordinate space (i.e. √[(x'-x")²+(y'-y")²]) or the same in tile's coordinate system.

Another option is the Manhattan or taxicab distance: d = |x'-x"|+|y'+y"|; even in this case you can use tile's coordinate or canvas' coordinate.

The best way to evaluate this norms is to see the shape of a disc.

Given a center, a disc is every point that falls within a fixed distance (however computed). 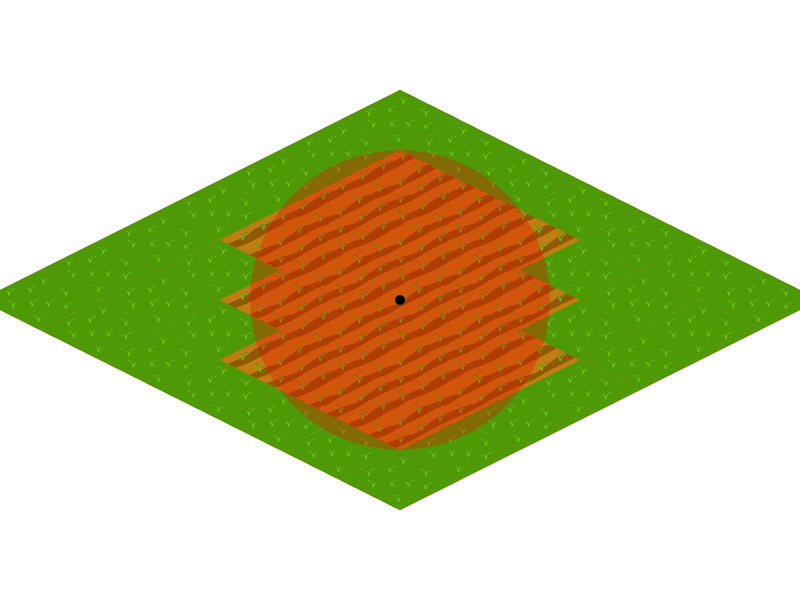 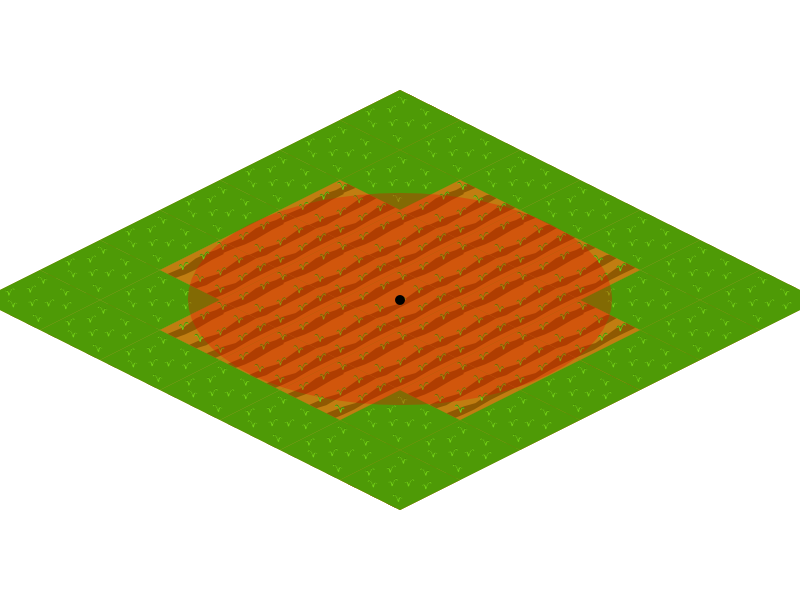 While the first one is easier to compute in general (you don't have to go back and forth tile and canvas coords), the second gives a better fill.

The "Euclidean Tile" is the norm that is generally considered the most correct one. 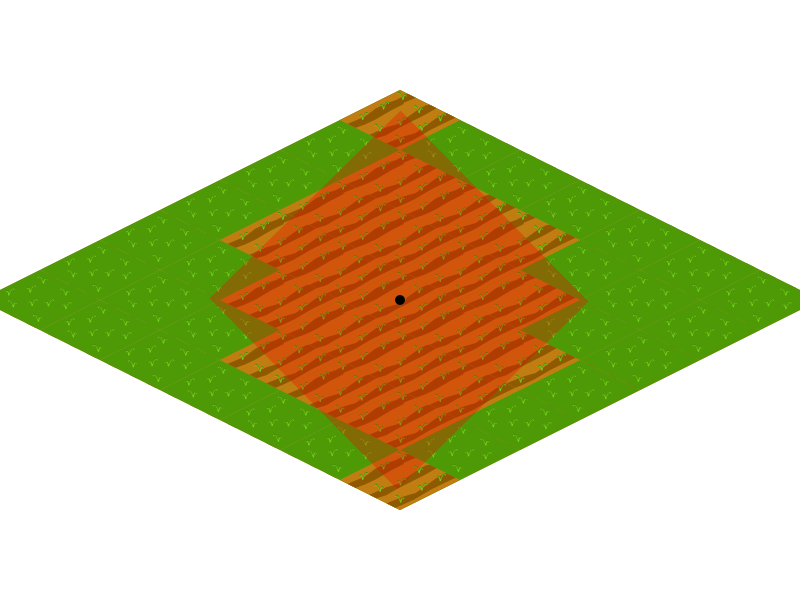 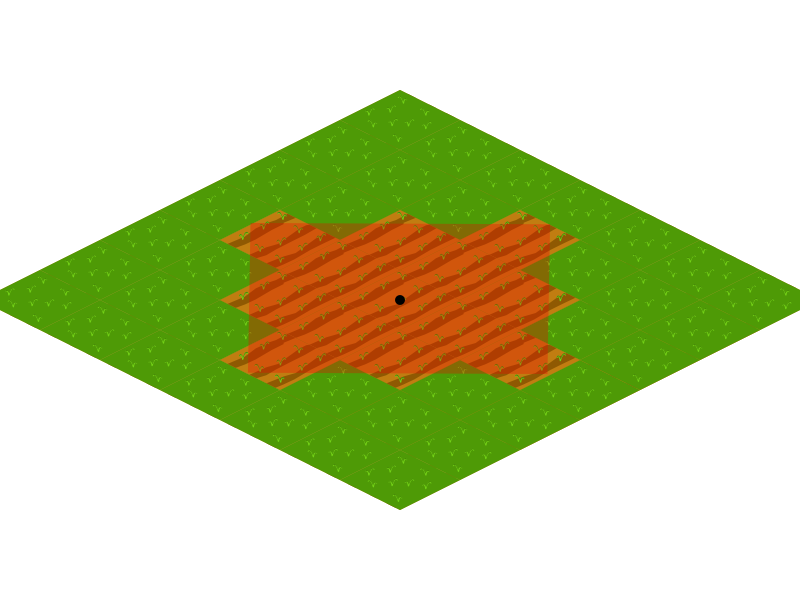 We can see even this time how the canvas coordinate gives the worst results: this is the price for an easier way to compute distances.

The "Taxicab Tile" gives a reasonable results, quite similar to the "Euclidean Tile", but simply summing the tile coordinate. This is a very popular norm for this kind of problems

Using the max if axial distances, the disc becomes a rectangle and the equivalent diamond in canvas and tile space respectively 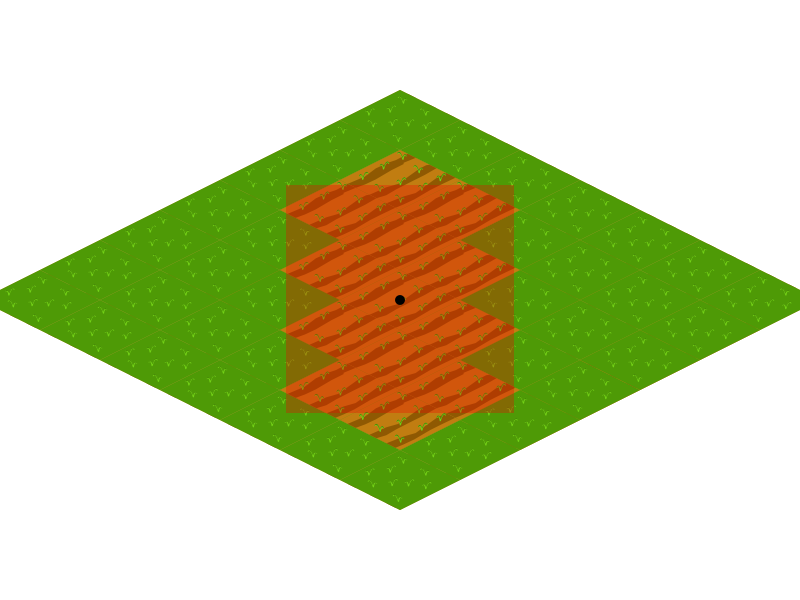 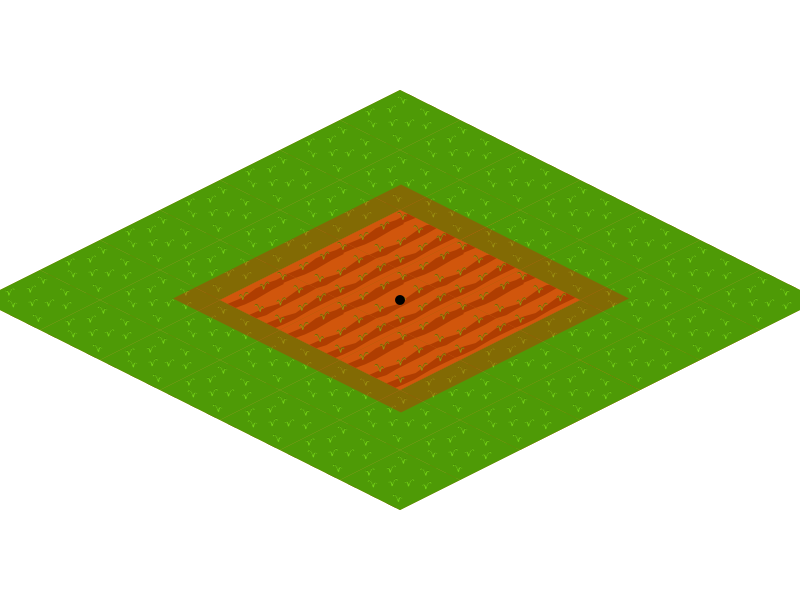 Ok, let's face it: the L0 canvas is horrible.

On the other hand the "L0 Tile" make it sense: it is quite clean and very easy to compute. Can be taken into account when playing with slow device and we need to use every clock cycle.

The norms computed on canvas coordinates give the worst of the results: the two coordinate systems does not match very well so the price to have a easier norm is simply too high.

The Euclidean norm is the better choice but the slower one; The Taxycab norm offer a very good trade off.

The "L0" is the fastest and easier but the price is to have a distance that is a little unrealistic.

If you want to find a distance in grid tile units, then simply divide:

If you don't need exact distance, but only to check whether your object (x1,y1) is within given range from some point (x2,y2), you don't need sqrt at all. It would be enough to check the following:

Not the answer you're looking for? Browse other questions tagged actionscript-3 tiles isometric or ask your own question.

2
How do I find which isometric tiles are inside the cameras current view?
4
Canvas tile grid, hover effects, single tilesheet, etc
11
How to create tilted (height) isometric tiles
3
Can anyone explain step-by-step how the as3isolib depth-sorts isometric objects?
4
What are the document grid settings in inkscape for making an isometric tilemap for tiled?
39
Difference between “staggered” isometric and “normal” isometric tilemaps?
4
Distance between two points with staggered isometric coordinate system
2
How to know the boundaries of an isometric tile?
0
isometric background that covers the viewport