I know some differences between Update() and FixedUpdate() and recently I have used both functions in one script. The code is working, but I have a question:

Does using both of these functions cause any problems? Is it safe to use them both?

When you’re keeping track of game logic and interactions, animations, camera positions, etc., there are a few different events you can use. The common pattern is to perform most tasks inside the Update function, but there are also other functions you can use.

FixedUpdate is called on a reliable timer, independent of the frame rate

Update is called once per frame. It is the main workhorse function for frame updates.

LateUpdate is called once per frame after Update has finished.

Any calculations that are performed in Update will have completed when LateUpdate begins. A common use for LateUpdate would be a following third-person camera. If you make your character move and turn inside Update, you can perform all camera movement and rotation calculations in LateUpdate. This will ensure that the character has moved completely before the camera tracks its position.

To use Fixed Update, Update and Late Update Simultaneously is safe.

So the execution order for all of is different but they run simultaneously.FixedUpdate is updated for fixed timeframe independent of device fps, Update is called per frame depend on device fps. 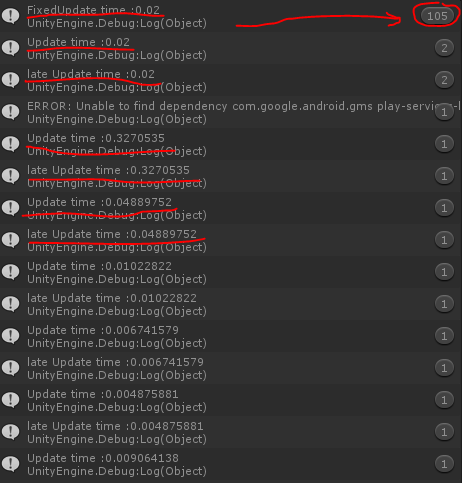 There's also LateUpdate, if you want certain functions to run after the Update function of that reference frame. For a full list of messages, see the MonoBehaviour reference.

Here's a link to the Unity tutorial that covers this.

Not the answer you're looking for? Browse other questions tagged unity c# unityscript or ask your own question.

10
What's the difference between Update and FixedUpdate in Unity, and should I bother?

1
Unity 2D, do Touch event must happen in the update() function?
8
Pointers in C# Unity
9
What's the difference between Mathf.Lerp and Mathf.SmoothDamp
1
Character keeps falling through the terrain and jittering
0
I have a switch cameras script and two cameras but the switching is not working good. How can I manage all the null exceptions?
0
FixedUpdate is Being Called Less and Less Over Time…Why?
0
What is best for 2D movement: velocity or AddForce?
0
Unity Events executed out of order