there, I am making a strategy 3d game somewhat like Global Superpower, its much simpler mechanic wise but im now attempting to make performance improvements, now I am wondering what sort of approach would be good for my game, specifically in the way of moving entities addresses into vectors - that would relate to my Octree's well, stricly speaking its not a true octree, but it is the world divided into 8 Cubes, to reduce collision and unit combat stress instead of searching through the whole vector.

Diagram - of my current approach 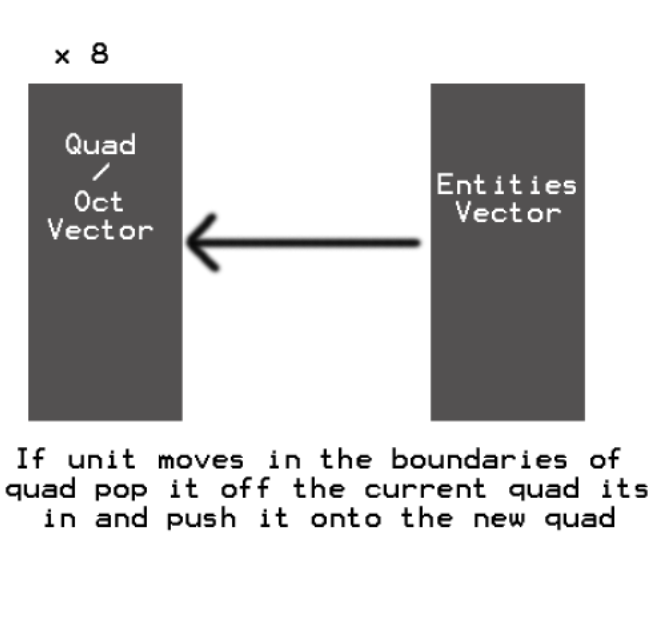 There is a problem with this approach, I am struggling to manage pushing and popping the entities onto the vectors as they require a new instance of an entity, not a current entity, I have tried creating something like vector<entity*>*myaddresses -but its not worked.

Any idea how I can do it for just addresses or is there a better approach ?

Hard to say without more context, but here's my gut feeling as to what your issue is.

You can certainly store a vector of pointers, but

As an aside, if performance is your focus here, I'd recommend storing a vector of small structs which contain your entity pointer, and a copy of some of the most relevant information you're likely to use when searching the octree. For example

Why? Because ideally if you're writing fast code, you want to avoid repeatedly accessing objects that are scattered around in memory (which is often the case when you're dealing with pointers). If you store a contiguous array of structs containing the most common info that's typically searched for, then you can potentially reject entities without ever dereferencing the entity pointer (and likely incurring the cost of a cache miss).

Obviously you can't optimise every single octree access, but it's something to bear in mind.