How do you create a perfect maze with walls that are as thick as the other tiles?

I read this article about dungeon and maze generation. The author uses a kind of specialized algorithm for generating 'perfect' mazes that have walls of non-zero thickness.

(Edit: I misunderstood the term 'perfect' here. It actually means there are no loops in the maze)

As I understand, typical maze algorithms work for walls of zero thickness but this is not what I want.

He posted his code in the article, but after a cursory glance, I think I need someone to explain the procedure (or a similar one) in plain english. 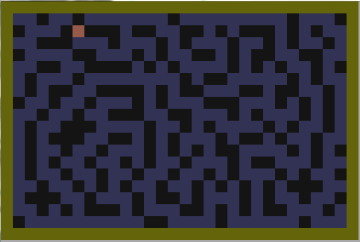 Which produces an effect with the diagonals that are unsightly. 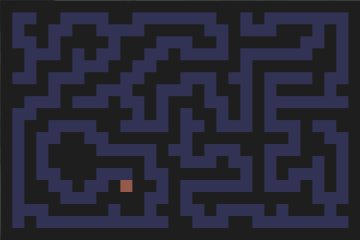 Which is better but its not 'perfect' in the sense that it seems to waste some space.

If someone can give me simple english instructions I might post the python code after I get it working.

If I understand you correctly, you want to create a densely packed maze like this, where each wall is the same thickness as each corridor: 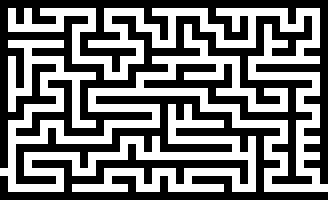 But you say the maze algorithms you've found only deal with infinitely thin partitions between cells corridor cells, rather than thick walls like these.

Let's look closer. Here I've overlaid a grid on the maze above, colouring all the even columns blue, and all the even rows orange: 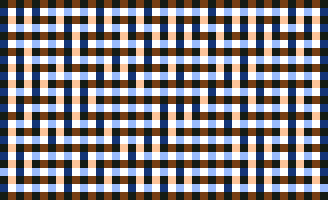 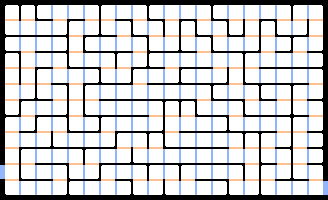 Gosh, that looks a lot like the output of one of those algorithms with infinitely-thin maze walls, doesn't it? Just at half the resolution.

So, we can take any maze algorithm that works on a rectangular grid with infinitely thin partitions between cells, and convert it to a thick maze like so:

Not the answer you're looking for? Browse other questions tagged python maze or ask your own question.

0
How can I implement path finding with obstacles between cells?

2
Anybody know how I can write a game for the dualshock 3 or other gampad in python?
3
How do I efficiently render the tiles of a tile map?
0
How do I make a sprite collide with walls in pygame?
1
How to create old-school format music with small file sizes
1
How to figure out which tiles are within view, and where to draw them in the grid?
0
How do I create a maze without drawing each individual line or using sprites?
6
How to randomly create a fair maze for a multiplayer game?
0
How can I create a boundary so the sprites don't go off screen?