When I drag a JLabel, why is it appearing in a different location?

I am making a checkers game, and it is behaving very strangely. As of now, I am just trying to get the basics, such as grid layout, and getting the pieces laid out and moveable. My 8 by 8 grid opens just fine, and all of the pieces are laid out on the panels correctly, using two components:

When I try to drag a piece, a new piece opens from the top left piece. When the piece from the top left is dragged over the old piece, which does not move, the old one is erased and the new one takes its place. How can I make the pieces behave correctly, moving from their old place, not the top left? Would it be easier to look into java.awt.Graphics?

I have looked at this StackOverflow question, and searched the Oracle JavaDocs, but can still not figure out what is wrong. Here is my current program:

Here's a screenshot of the window. When a piece is dragged, a new one comes out from the same place as the red top left piece. 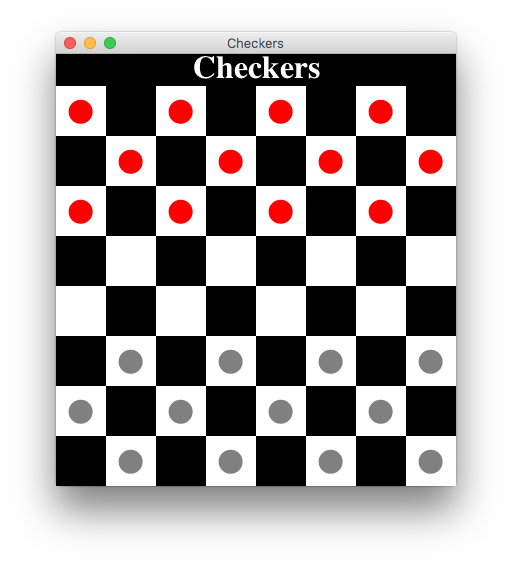 This effect is caused by a number of issues in your code.

First, note that you're creating your MouseAdapter inside two nested for-loops. In effect, this means you're not just creating one MouseAdapter, you're actually creating GRIDSIZE x GRIDSIZE = 64 instances of MouseAdapter.

But that's not the cause of the problem. Rather, it has to do with how you find the piece that the user clicked on. At the top of mousePressed(...) you're calling centerPanel.findComponentAt(e.getPoint()). However, due to the way this method is defined, it will not actually find the piece you're after. Why is that?

findComponentAt internally works like this: on the Container it is invoked on, iterate over all child components. If a child is itself an instance of Container, recursively call findComponentAt on that child; otherwise check if the given point lies inside the child's boundaries. The problem with that method is that (a) when no child passes the test, it returns this (rather than, say, null) and (b) JLabel inherits from Container. These two points combined mean: the first leaf in the component tree under centerPanel that is either a non-Container and contains e.getPoint() OR is simply a Container will be returned. And since your pieces are JLabels and JLabels are containers, findComponentAt will always return the first piece, no matter if it actually contains the given point or not.

But wait, there's more! As a matter of fact, these are still not the only issues in the your current version of your code. Even if you replaced the call of findComponentAt with something that actually finds the right piece, like say, the following:

you still have a problem due to the way your component hierarchy is organized. Your centerPanel contains 64 CheckerPanels which in turn may or may not contain a JPanel piece. Unfortunately, though, that means that you cannot draw a proper piece movement from one panel to the next because for drawing, child components (the JLabels) are confined to the boundaries of the parent container (CheckerPanel) which they're a child of. You've tried to circumvent that by calling centerPanel.setComponentZOrder(selectedLabel, 0). However, if you look at the documentation of setComponentZOrder you'll note the following:

If the component is a child of some other container, it is removed from that container before being added to this container.

This applies to your situation here: selectedLabel initially is not a child of centerPanel but of some CheckerPanel instance. Thus by calling setComponentZOrder you're removing it from that CheckerPanel and adding it to the centerPanel which basically sabotages your whole data structure in which the centerPanel contains CheckerPanels which contain JLabels.

In my opinion, you can make your own life a lot easier if you forget about a component hierarchy altogether for your game. Components are really made for traditional GUIs in desktop applications: menus, buttons, drop-down lists etc. Instead, you will get rid of a lot of problems if you implement centerPanel in such a way that you override its paintComponent method in which you draw the complete board with all the pieces yourself, i.e., CenterPanel and the pieces do not inherit from any AWT or Swing classes anymore but are purely for data structuring -- if you need theses classes at all!

If you want to go one step further and have animations such as dragging a piece be especially smooth, you may even forget about paintComponent and instead use a BufferStrategy to actively draw at a chosen frame rate, rather than repaint when some event occurs. However, this is again a bit more involved and for a Checkers game done purely for practice, you could certainly stick to the paintComponent approach of the previous paragraph.

Not the answer you're looking for? Browse other questions tagged java swing or ask your own question.

1
3D Location Handling
1
I'm not sure why my shape is not moving
0
Slick UnicodeFont displays in different location depending on the screen size?
4
When handling key input, I'm getting a negative timeout value in my thread. What's going on?
1
Why is the movement space increasing?
3
Why is my Mario clone game sprite getting cut off when I try to change it?
4
Swing KeyListener doesn't work when pressing Shift X Z and directions at the same time
0
Why is the rectangle not moving?
0
Correctly drag object with mouse