Why am I unable to edit the Input Field object's script?

When attempting to edit an Input Field object's script like so 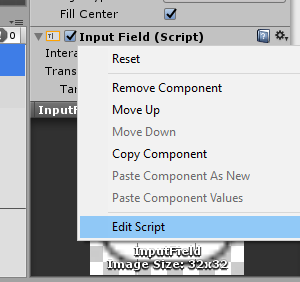 I get the following error:

Why is Unity attempting to open a *.dll, here?

The component script you are trying to open is built into that DLL file (i.e. part of that dll). To open the dll file you can use .net decompiler like ILSpy or dotPeek.

Alternatively, you can find the component code at InputField.cs, as part of the Unity-Technologies repo, available under the MIT license.

7
Problem getting information about running processes with .GetProcesses() in Unity3D on OS X
1
InvalidOperationException when using C# DLLs with Unity3D
1
Unity assembly files missing from “Temp/bin/Debug”
3
Synchronization problem with Visual Studio 2017 and Unity 2017.1.1f
2
“Method 'System.Net.Logging.get_On' not found” on built application in Unity
5
How can I launch Visual Studio via a double-click on a C# script in Unity?