Object movement to a circular shape, with the grab of a VR controller?

So far, I have made a sphere, with a parent. The parent position is updating with respect to my camera head, so I can move my sphere with my player. The sphere object should move with the controller, but in a circular motion. This has not been achieved, yet, and I really don't know how to do it.

I am able to grip the sphere object using a VRTK script, and I can freely move it, but I want to restrict its movement; much like in the illustrated figure, below: 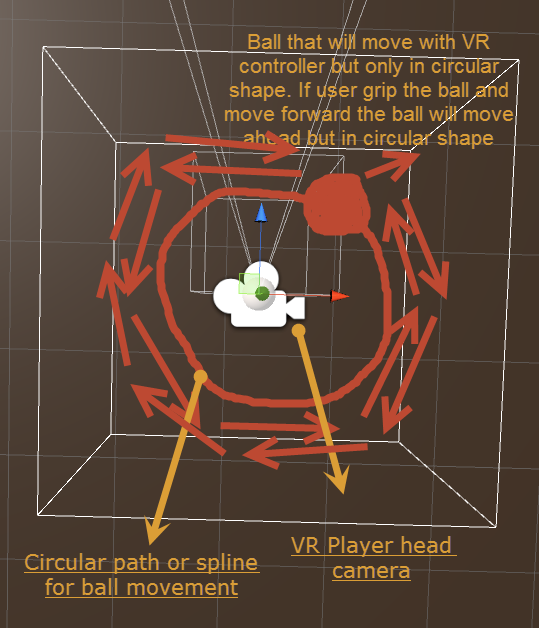 So you want to restrict the usual spherical movement that occurs as you move the Vive controller around, to a sort of equatorial, planar movement. I'm going to assume that as in this tutorial, your Vive controllers and head are all part of the same transform hierarchy (what they call CameraRig there).

For both options A & B These will superficially work, but you will find that if you look up or down then the sphere will get slightly closer or further away. This is because we are essentially projecting the sphere co-ordinates onto a flat circle. To prevent this i.e. to keep a fixed radius, set sphere's transform.localPosition.z to the distance you want, which might be the distance between the Vive controller and your camera, which is easy to compute, or you could always set it to, say, 1 unit.

From a mathematical standpoint, we are really just projecting a sphere onto a plane. Between these varied approaches, you should be able to work to a solution. Feel free to ask questions, below.

Not the answer you're looking for? Browse other questions tagged unity c# virtual-reality or ask your own question.

1
How to circle an uneven object with Camera at a fixed distance?
1
Can't parent the standard FPSController during gameplay
1
VR Play postion Sync over the network
0
Help with a snake like movement
0
Move Camera After Player Moves Certain Distance
0
No more FallbackHand in SteamVR Player prefab
0
How to rotate an object based on the movement and angles of Lifters