How can I control a game 2d car mechanic from acceleration & speed to just 1 value?

What I am trying is to have a formula with having only one value (with a max) instead of two as I am trying to simplify the UI for the player.

Alternatively, I was thining of having a value (lets call it speed) that gets incremented by something, without a max, but is limited by, lets say road friction (like multipling it with 0.99). Such a thing would be felt lower when the car is slow but eventually the friction would act as a max/limit, the car oscilating to near max values.

I know too little of physics and car stuff to figure this out on my own so I am reaching out for help. Thanks!

I think your idea of simulating friction is on the right track. A stronger limiter of speed in real life is air resistance, which increases with the square of speed.

Air resistance is a type of drag, and to use it you would do something like

At lower speeds, this drag will have a relatively small effect due to the very small DRAG_COEFFICIENT. As the car moves faster, it will cause the car to accelerate less and less. At some value of speed, the drag will overtake what's being added by your acceleration and cause the car to top out.

I would suggest a Logarithmic function. A logarithmic curve starts to climb quickly, but slows as it tends towards the limit. 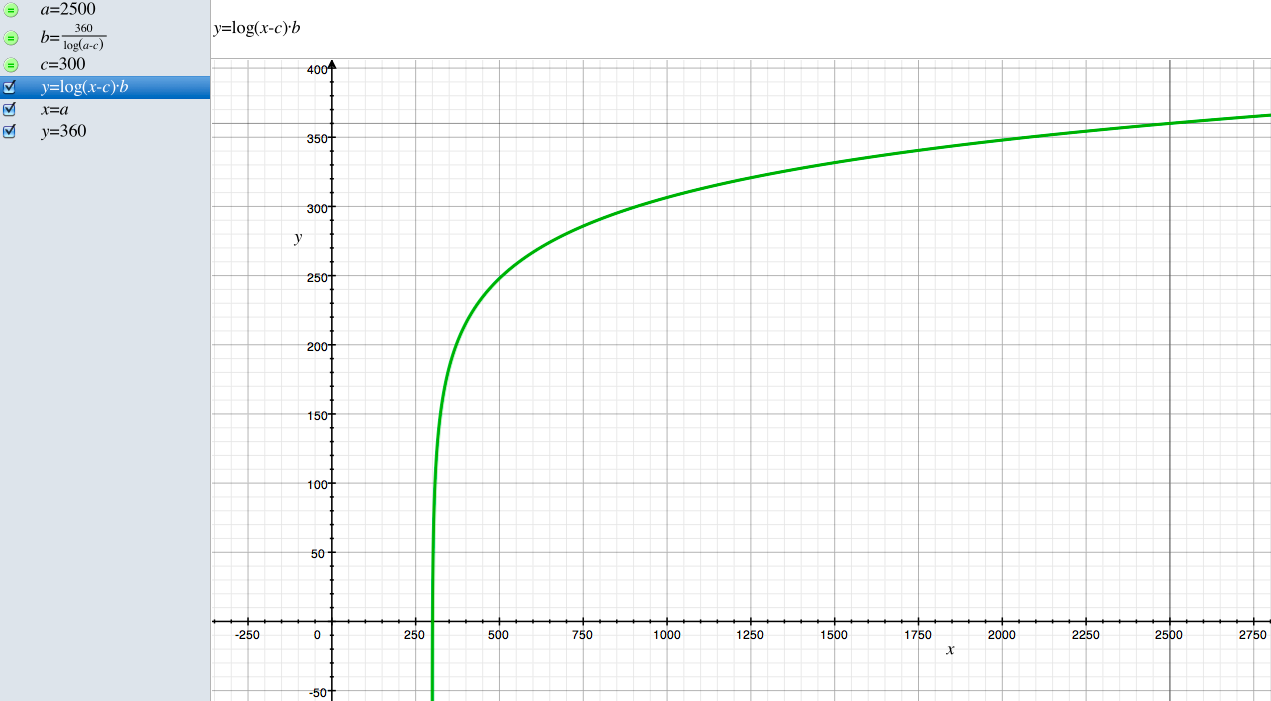 You'd have to tinker with the equation to get it just right for what you want, but that's the basic concept. Your increment is the X-axis here, and your speed the Y-axis. As X gets higher, Y tends towards a maximum limit.

Not the answer you're looking for? Browse other questions tagged physics mathematics vehicle or ask your own question.

8
How do I make a moving object stop smoothly at the end of a path?
3
Math to steer a car
1
Downsides of using this integration formula for movement?
8
Change in direction should slow down object and accelerate in new heading (2D grid-based)
0
How to calculate acceleration and deceleration
2
Box2D: How can I speed up a physics simulation with many, many overlapping box bodies?
1
Simple 2D vehicle physics - maintaining vehicle length
0
C# XNA How to work out minimum distance to decelerate and stop at a point
1
How to ensure my Sine Wave movement starts from the middle-line of the wave
0
Formula Racing Physics in curves (under-steer, over-steer)