I'm trying to achieve a constant movement of the red dot like on the image below. For now, I have something like:

As you can see in the code, it rotates around the upper circle now. I need to switch the target variable to the secondCircle when the player comes back to it's initial position (or is near it).

and it works but has two issues. First - the epsilon value. If I set it to 5f the above if is true like 7 times (depending on the player's speed). Of course I could make a lock to run it only once per cycle, but there's a second problem. If the object is moving too fast, the if will be false each time, cause the speed-step is always higher than the epsilon. 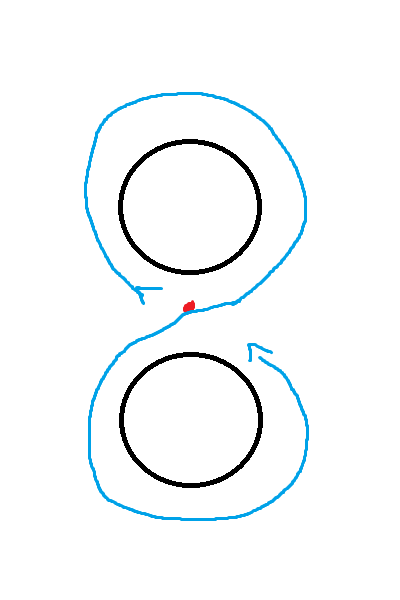 How is this done in 'gravity' games like AngryBirds when the bullet changes it's attraction point?

There are two options, both involve using a velocity vector.

Option A: Place a "trigger" at the center point. When triggered, set the center of orbit based on the direction of the velocity. IE: the dot product of the vel and the vector towards circle A > 0 then set circle A as orbit center, and vice versa. For this method, velocity can be determined by comparing current point and previous point.

The big problem with this method is that it won't work for a more complicated selection of objects. If you only need to move around 2 circles it's fine, but beyond that it's not really going to work.

Option B: Actually do the gravity calculations / steering forces. Start with some initial V and add the acceleration from gravity or target seek. Naturally this will give you the most realistic results as the object will be moving in ellipses rather than perfect spheres. For this to work, you will need to start with an initial velocity.

This scales very well. Everything works as expected regardless of the number of objects.

4
Unity's Quaternion.Lerp slows down when target is directly behind turret
0
Unity rotating camera around specific Vector
0
Unity Rigidbody stops directly after moving
1
How to completely stop the camera from clipping into the ground
1
Calculate heading required to turn ship so that its weapon can fire at target
0
How to split 2 teams for a FPS death match game in Unity?
0
Why the cube is getting to the other cube instead stopping when both colliders hit?
0
How to calculate the dot product between the input direction and a character with root motion?