What would be the optimal order to render something with OpenGL

That question mind sound dumb, but let me explain: I'm writing a 3D rendering engine in C++, and my way of getting something to the screen seems rather unintuitive: 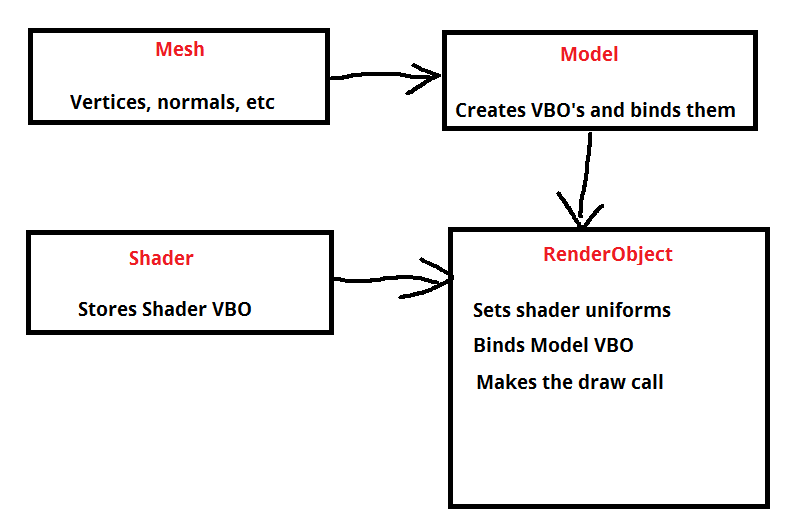 I really hope that my artwork is understandable. To be sure, I'll just explain it again with words.

That would be how I get something drawn on the screen. Is that the proper way of doing so? Is there a more or less standard way of doing this?

Is there a more or less standard way of doing this?

Yes, there is; I would honestly say that it depends on your game:

If you are making a simple 2D game, with maximum 20/40 sprites at the time being rendered onto the screen, that ^ is an acceptable method, even if not the fastest.

If you are planning to port your game to mobile for example, you definitely need a faster way of rendering things on the screen.

For that, I would suggest you to take a look at Data Batching.

As the name already states, Data Batching is a process where you load all the data you want to render inside a single buffer (a Batch) and pass that to a Renderer of some sort, which then sends everything to the GPU and makes the draw call / draw calls (In OpenGL for example, you would call glMapBuffer(...), set the data, and call glUnmapBuffer()).

This way, instead of having a 1 object to 1 draw call ratio (which is quite expensive), you would have a x objects to 1 or 2 drawcalls ratio (depending on how you want to handle the buffer).

This is the bare bone structure and that's how a simple object is rendered. These are the things which you have to do,the optimization lies in the fact that how many times you bind or unbind an entity.

You should use which ever layout you want but it should keep the binding calls to its minimum.

eg- setting the uniform while you bind program while creating it minght reduce some program binding statements.

off course sometime it cant be avoided, so the best way is to try and keep less binding calls and be done with one entity in its first bind.

Not the answer you're looking for? Browse other questions tagged opengl c++ rendering or ask your own question.

10
Engine Rendering pipeline : Making shaders generic
0
How to efficiently change VBO size?
1
Problem with uniforms in OpenGL
4
How does a general Renderer::drawRect(0, 0, 100, 100) handle VBO's?
0
Render model with meshes with materials and/or textures
6
OpenGL VBO and VAO Confusion
0
Modern OpenGL project in c++ .obj loader
1
What is the fastest and most convenient way to draw a number of identical objects at once in OpenGL?
3
How do you store uniform data?
0
Improve opengl drawing with less calls as possible