I have a problem with any mesh I import from MagicaVoxel into Unity. As you can see from the screenshot below, the mesh on the left cast a shadow that has holes in it. That's a basic 7-voxel mesh exported as OBJ and dragged into Unity. The light is the standard directional light Unity automatically creates in an empty scene. The glitch occurs in scene editor, preview and exported builds, I tried on multiple PCs as well. 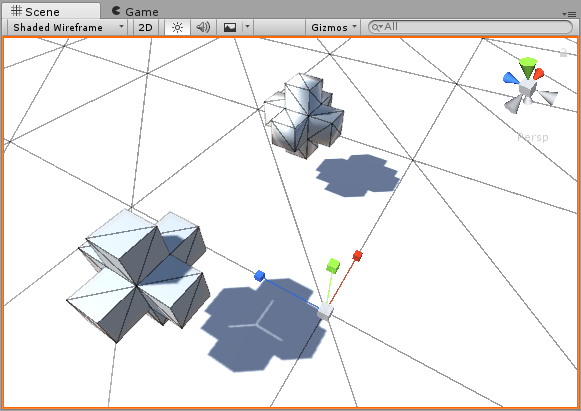 The mesh on the right is a cube extruded on all faces created in Blender and exported as 3DS. As you can see from the wireframe, it is basically the same mesh, but its shadow looks good. Note that if I import the MagicaVoxel's OBJ in Blender first, and then I export in 3DS and into Unity, the shadow stays holed, so it's not a problem with the mesh format, but with something in the mesh itself.

What can it be? Can I solve it somehow or try some others approaches? Thank you.

I'd ordinarily make this a comment, but doubt there is a better answer given what you're seeing...

It likely has to do with them building the mesh without always using shared vertices, resulting in various submeshes leading to the artifact you see (if it had been a single manifold, there would have been no such issues). I'd suggest one of the following:

Not the answer you're looking for? Browse other questions tagged unity 3d lighting voxels shadows or ask your own question.