How to see my plane & ball in the camera during play?

At the 13:00 mark of this tutorial, the narrator manages to launch a scene and control the ball (player) in that scene.

However, when I launch my scene after following his instructions till then, I do not get anything viewable in my camera.

After playing around with the camera, I discovered how to manipulate the camera icon ( which looks like a video camera with 2 film reels on the top ) to have its cone like thing projecting from it include the plane on which my ball is on ( see image below). Still no luck. 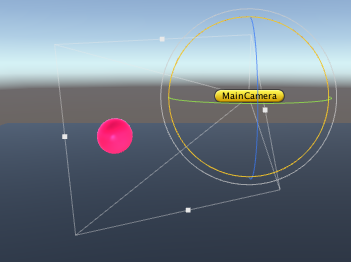 What am I doing wrong?

2
Camera movement using WASD on x/z plane only
1
Unity, Cannot See Items on the Scene
1
Camera follow rotating ball - ortogonal direction
1
How should my creatures see the world?
0
How do I make my plane appear 3D like in the “Roll-a-ball” tutorial?
3
Objects appear invisible to camera during animation
5
(Unity) Proper way to save ScriptableObjects changed during play mode?