What's the difference between Alpha and PreMulAlpha?

This means the colour of a texel is treated entirely independently from its transparency, which is intuitively simple, but has some perplexing implications: it's possible for an object to simultaneously be both "purple" and "invisible" (ie. rgba(0.5, 0, 1, 0)), as odd as that may sound.

It's so-named because the multiplication of the first term by foreground.alpha has been baked-in ahead of time.

But pre-multiplied blending has some extra super-powers...

This is because the pre-multiplication means we're storing data in terms of:

By leaving the obscuring alpha factor at zero, any values in the RGB channels get applied additively on top of the background, without being dimmed themselves - a classic "ADD" blend mode. By setting alpha to something between zero and one, we can get blend modes that are intermediate between additive and "standard/layer" blending.

This can be used, for instance, to combine multiple different sprites into a single batched draw call, even when they want different blend modes that would ordinarily force us to separate the batches.

We can even make a single effect that combines both blending modes, like a fire particle system that transitions from bright additive flames to opaque obscuring smoke with a single material/texture sheet:

Let's say we wanted to pre-compose some layered sprites - like a character made of several body part and clothing layers - into a sprite sheet with a transparent background, so we can later just stamp that pre-composed character into our scene as a single unit.

Here we don't yet know the colour of the background we're drawing over, so applying the standard blending formula using the simple lerp style will actually give us the wrong result when we later layer it onto the background.

To get the same result with standard blending as if we'd layered the image from bottom up, we have to use a slightly more complicated version of the formula:

Note the division there, making the blend substantially more expensive to calculate, not natively supported in the GPU's blend stage, forcing us to implement the composition in our shader. When we can assume the background is opaque, the denominator comes out to 1 and we can skip it, but we can't do that and maintain correctness when blending transparency with transparency.

With pre-multiplied alpha though, there's no division required, and we can do this pre-composition directly in the native blending pipeline:

Much simpler! And the same formula works whether we're blending onto an opaque background or a transparent one.

With regular alpha blending can suffer from discoloured fringes at the edges between opaque and transparent regions - particularly if it's drawn with bilinear filtering, or mipmapped to lower resolutions.

This is caused by the lack of weighted blending that Roy T. explains in detail in the other answer.

Look closely at the edges of this sprite: you'll notice in all but the top-left version, the colour shifts just at the fall-off from opaque to transparent - getting a dark shadow or a light whispy halo.

The reason is that many authoring programs will output fully-transparent texels as back or white, or some other colour chosen by the compressor. When blending between two texels along this edge, the alpha results are correct, but the colour results are wrong: the adjacent texel we're blending with isn't a colour the artist painted there (they left it transparent/empty), but one the tool filled in.

This is where the "simultaneously invisible and purple" issue comes back to bite us. There are dragons lurking in those unseen regions!

We can often fix this by bleeding out the colour we want to average with into the transparent regions, which is what I did to remove the artifact in the top-left case.

Because this is a widespread problem, game engines can often fix this automatically - for example, in Unity checking the "Alpha is Transparency" box in a texture's import settings will usually eliminate fringing artifacts, doing this colour bleed or something like it under the hood. (I left the box unchecked for the example above, so Unity was forced to take the PNG's saved colour values literally)

But if you use pre-multiplied alpha, storing plain black in the transparent regions, this problem goes away. Now instead of meaning "an invisible black monster lurks here" a black transparent pixel means "absorb no light, add no light," exactly what we want from a transparent region. And it blends correctly with adjacent texels - a 50% blend of "absorb all light, add 100% green light" with transparent black yields "absorb 50% of light, add 50% green light," a correct reduction of opacity without distorting the colour.

This is of particular significance for texture formats like DXT1, which can only store 1 bit of alpha as transparent black. So you get perfectly correct blending if you interpret the texture as premultiplied alpha, but you have dark fringes with standard alpha blending that you can't fix with colour bleeding - since there's no way to store colour and transparency in the same texel in such a format.

See the below images. In the first column we have a square which is filled with red and semi-transparent green. In the second column we see the result if the colors are averaged (for example, if we're using bilinear texture filtering to draw a sample halfway between these two differently-colored texels). The first row uses post-multiplied-alpha while the second row uses pre-multiplied alpha. 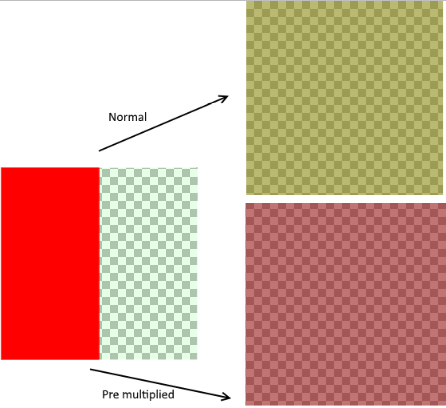 So a red image and a green image combined will result in a green-brown image, even if the green image was so faint as to be nearly transparent.

Note that this blending artifact does not apply to layering a sprite over a background, pre-multiplied or no. In that case, the blending function correctly takes alpha into account either way for a correct weighted blend. It's just the naive interpolation between RGB channels in texture filtering / mipmapping that needs the extra weighted blending correction offered by pre-multiplication.

I recommend reading this article for a more in-depth answer and how to use pre-multiplied alpha (you need to make some changes to your graphics pipeline).