Do you have any idea how to extract graph data from this type of procedurally generated level? 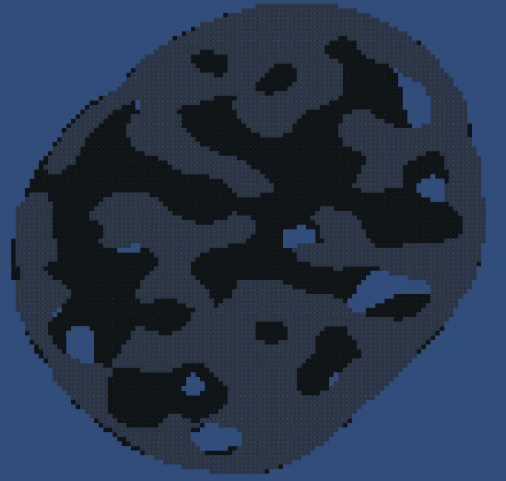 Well, actually we need to analyze only top level (gray). Background (black) does not matter. What I am looking for is a way to statistically analyze such type of generated maps. For example how much isolated areas I have (it's not hard, I know), how much branches in each area I have and which areas has exit. 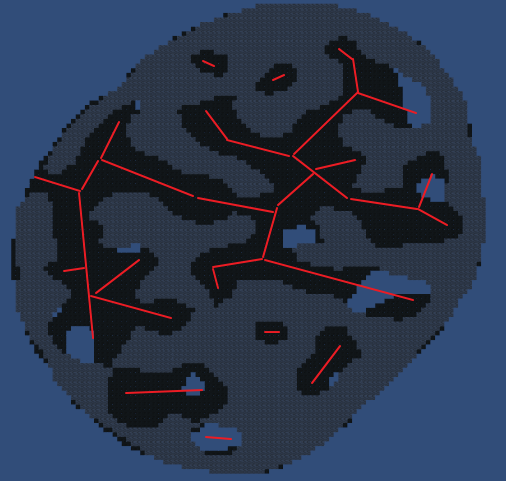 Here's something you can try. First, take a map like this:

Record the distance from the edge

of each empty cell. You can do this iteratively using cellular automation. I've used Manhattan distance but you can use others, although I think your choice affects a few of the following steps.

Find the cells that are more distant than all their neighbours, a.k.a. local maxima. Mark these as peaks

Find all the cells that are at least as distant as all their neighbours. I guess you can call these ranges

; they form groups that are local maxima for the most part.

From here you can connect most of the ranges

by looking at their neighbours and hill climbing; these will form ridges

You might notice that not everything is connected, particularly on the right part at some narrow passageways. You can connect them up by finding such passageways and hill climbing away from them; eventually you'll reach a range or peak. Here's one way to identify these: find cells that are:

For example, given this group of four cells:

. Similarly the top-left and bottom-left cells are also opposites and part of a col. Just like with the ranges, you can hill climb

to connect the cols to the rest of the graph (if they weren't already).

That's it; you should have connected graphs for each contiguous area. You can convert the peaks

into nodes, and the connecting ridges

into edges, for graph analysis.

You also have some metadata to play around with; the distances of the peaks and ranges represent how wide those areas are, and cols tend to be choke points.

I'm not familiar with the various Computer Vision algorithms for finding topological skeletons (like straight skeleton or medial axis), but the general idea seems to be the same.

Not the answer you're looking for? Browse other questions tagged 2d algorithm procedural-generation graph or ask your own question.

27
How can I identify feature regions in a procedurally generated world?
2
How can I cut a graph representing 2D positions into two sub-graphs?
1
Scanning a 2D tile map and detecting regions?
1
Procedual level generation for a platformer game (tilebased) using player physics
7
How to create a map from graph
7
What is the most appropriate path-finding solution for a very large proceduraly generated environment?
3
Procedurally generating dungeons using predefined rooms
1
Voronoi graph - traversing from vertex to vertex
0
Decorating a 3D procedurally generated interior