Unity: “inconsistent line endings” dialog shows up ever time I open VS with unity

Everytime I open a script file from unity with visual studio this dialog shows up about normalizing the line endings? What does this mean? I click Yes every time but still can't get rid of it. It only happens when I open a file from unity. 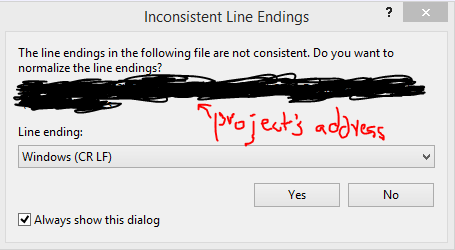 In Visual Studio, you can disable this check (and thus the warning) by looking in Tools -> Options, navigating to the Environment -> Documents section of the tree, and unchecking "Check for consistent line endings on load."

This suppresses the warning but doesn't actually solve the problem; the source files will still have inconsistent line endings. Ideally you'd solve this problem by configure all the editors you use to insert the same kind of line ending, or to autodetect the existing style and preserve it. Unfortunately not all text editors support such behavior; VS, for example, doesn't have a controllable default (although it will let you configure the style used on a per file basis on File -> Advanced Save Options, but this is really tedious).

As Josh Petrie mention, you can solve the problem by changing the line endings of each script you open. First, you need to close the script in Visual Studio. Then go to Unity and double click in the Unity console line ending warning message. Visual Studio will open the script with the missing and a line ending dialogue window will show up. Go to the Line endings section and choose Windows or the OS platform that you are using. Now save the script and next time you open VS, the message will not pop up for this script.

This will replace all LF to CRLF.

In Windows, the default template script can be modified as administrator or using admin password. Now open this script template with VS (file: 81-C# Script-...). In VS with the script selected, go to File -> Advanced Save Options, the window will pop up and choose Windows or the platform OS that you are using. Now save the script and next time you make a new C# script in Unity, the message will not pop up for all this new scripts.

Now you can also test if you wish this other tools for VS. This old video (at 10m32s) can help you in the process, but the rest of the video is already outdated. Warning, don't follow this tutorial, it doesn't work anymore. It helps you in the process of using Strip'em (after 10m32s)

Unless you're extremely committed to Visual Studio, I've found that literally just opening the file in another text editor (like Sublime or VS Code) and then saving it immediately fixed the issue. I've had poor experiences with Visual Studio in the past, and it's always extremely hard to debug weird editor errors.