I'd like to see the changes made in a scene (.unity file) before I commit them to git.

I have looked into several GIT/Unity solutions but all of them are made for merging changes and not for showing a diff with last version.

The problem with scene files is that they use GUIDs that point to other assets and when I open a diff for a scene file I can't really make anything out of it. 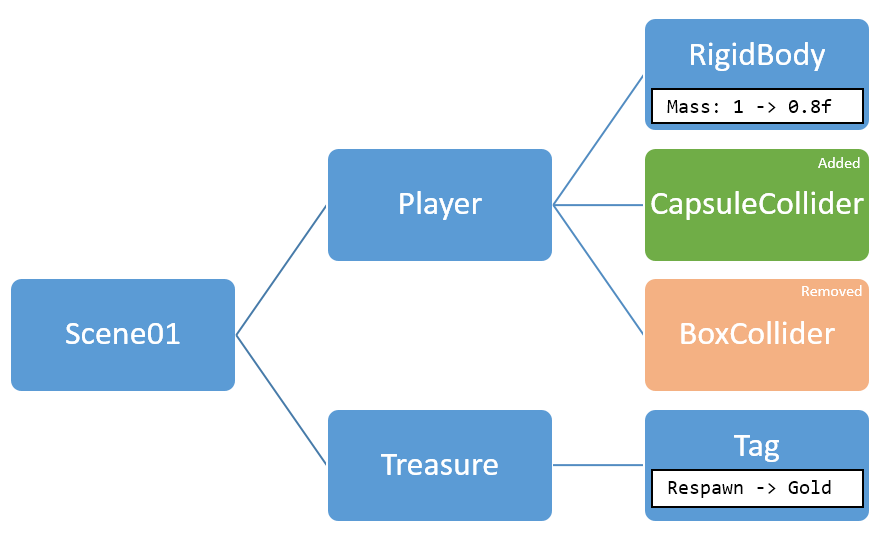 Is there anything existing that does this?

I'd like to see the changes made in a scene (.unity file) before I commit them to git.

Any decent git tool will do this provided the scene file is not binary; but, as you mentioned, the GUID references makes it difficult to read. If the scene is binary, serialization may be updated in Edit -> Project Settings -> Editor -> Asset Serialization; but, be warned: data-loss may occur (See Draco18s comment below.).

I have looked into several GIT/Unity solutions but all of them are made for merging changes and not for showing a diff with last version.

Seeing the changes made to a single file is one of the core features of git log. In fact, there's a stackoverflow question on that. Basically you'd use something like

to display the history of that file. Add -1 to display the most recent changes to the specified file. Ommit -1 and use -p to see the patch made for each commit that modified that file. I recommend reading through the stackoverflow question before touching the git-log documentation because it's very long.

Is there anything existing that does this?

As far as I can tell, No. That being said, Unity for Git appears to be the natural place to find it. Since it's in alpha, you should create an issue there to address this. Since it's unique to applying git diff on unity's intrinsic scene graphs, I suspect it'l be strongly relevant there.

I would recommend you to just use Git with Bitbucket (as push origin !) as it provides a really nice GUI that lets you see graphical representation of your branch and commit history as well as changes within the text files where You can even see changes in the code in red and green plus many other nice workflow features.

Not the answer you're looking for? Browse other questions tagged unity scene-graph scene version-control or ask your own question.

12
How to create a new GameObject, without adding it to the scene?
3
Do I have to commit the downloadable assets for Unity to the repo? Or a reference for the team to download them?
1
How to get an Unreal Engine 4 Level to sync using Git Source Control?
3
UnityYAMLMerge via git command line
1
How to prevent Unity3D generates unnecessary changes after saving scene with no actual changes