I am using Unity. I have quite a bit of Unity experience, however I am a novice in animation. In the past I have had someone else do character Animation aside from some Camera animation and simple object movement.

They get around the world by rotating themselves. Most of the time they would move by pivoting on the corners of their shape. Here is an image to show what I am talking about: 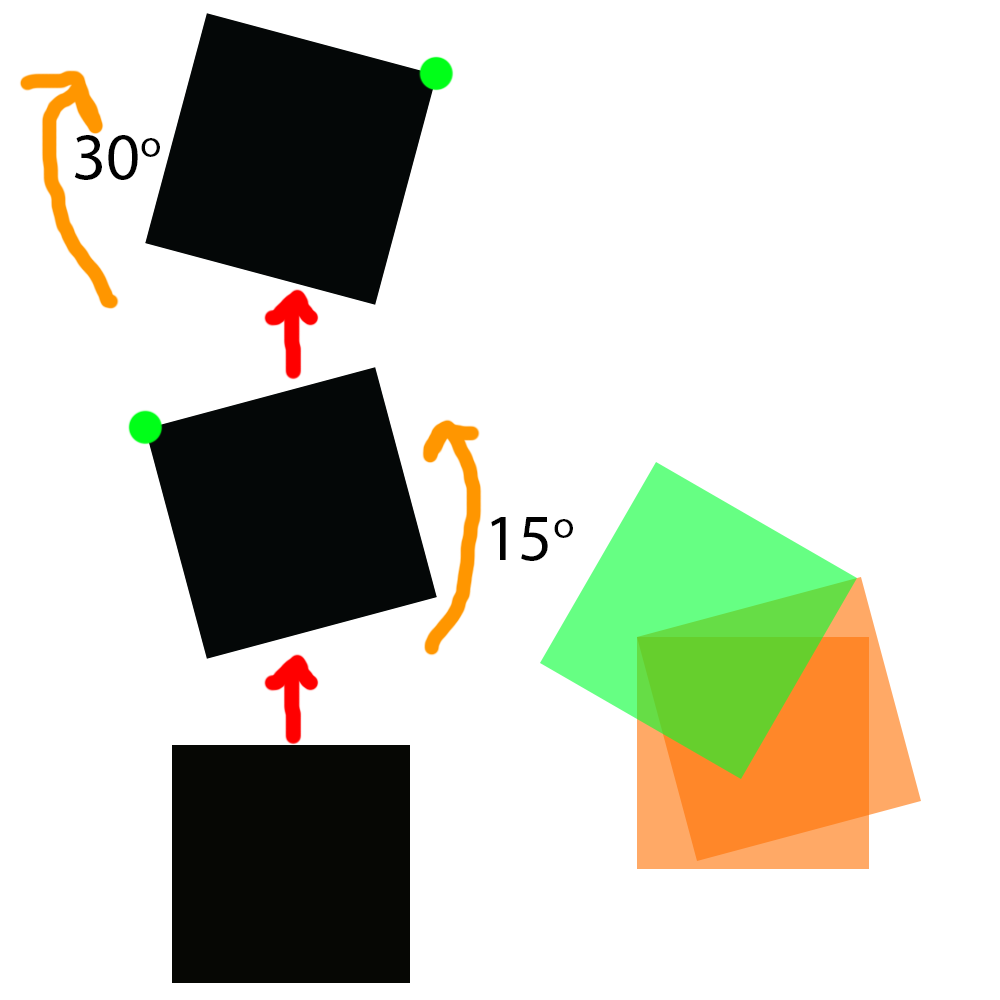 Think of moving a big cube of something heavy in real life by alternating pivoting it on the front two & bottom corners of the cube. That’s how they walk.

So by most means this is very simple animation: no need to alter a mesh’s shape. However I have a few issues that need to be resolved:

This movement is more of a game play mechanic than it is cosmetic.

TL;DR: This is my main issue: I am torn between how much to rely on code for these animations and when to use Unity’s (or Blender’s) animation system, if at all.

These are what I see as my options:

2) Programmatically: forgo the animation system and do all movement in code. May become also time consuming when doing more complicated movements, but maybe not.

3) Something else hopefully??? A smart mix of the two I haven’t through about?

The two options don’t sound great, and I am unsure on which one would be more time consuming. What would you do in my shoes? Is there a good third option I haven’t figured out?

If you only wanted to walk, I'd say you could get away with using Transform.RotateAround and simply have some anchor points on the corners.

But since you want more complex animation, and also some randomness, I suggest you use Mecanim. You can use root motion to let the animation drive the movement, eliminating the need to figure this out in code and using parent objects.

To add the randomness in the jump, for example, you can layer the animations in Mecanim. In that case you would make a clean jump, and afterwards an animation of some wiggling movement. Then you can additively add the wiggly movement to the jump using parameters to control the amount.

Since you have different sized cubes, you may want to create two animations for each type; like walking, jumping etc. and again, blend between the two based on their size.

Mecanim can sometimes be a little off when walking in straight lines or if you need to turn exactly 90˚ you want to look into Animator.MatchTarget.

You want to look into using blend trees, layers and parameters in Mecanim.

10
How do character/object interaction animations work in isometric games?
1
Proper way to handle Movement/Animation/AI functions of an AI character in Unity3D
1
Best way to do discontinuous animation? Or: Best way to animate a character with a jerky center of mass?
0
Animation playing incorrectly when controlled through player
0
Unity using raw mocap data without actually moving the character
6
How does a game like Enter the Gungeon handle forward and backwards movement with their orthographic set up?
29
What is the standard practice for animating motion -- move character or not move character?