I am making a game in monogame and have encountered the following problem:

The black arrows mark the places where the rendering is "off". As you can see the gray lines aren't "flush" or "smooth". Instead they have a "cut".

The two cuts at the top is at the same height, suggesting that an error happens with the positioning during drawing in that height. The two topmost cuts are 1 pixel off (from the cut and down) and the bottom cut is 1 pixel off compared to the texture but 2 pixels in total (again from cut and down). Furthermore, the cuts are always in the same place. The topmost cuts and the bottom cut are part of two different "draws" and happens even if the other is removed.

The background experiences this too some other places, but vertically and not horizontally as with the HUD.

This only happens in the resolution of 1920x1080 and not in any other I've tried. The problem fixes itself in fullscreen though.

What causes this and how do I fix it?

The resolution is certainly 1920x1080. I've double checked that.

This is how i draw the gray frame at the top

No resizing at all.

Here is the result from the checker board: 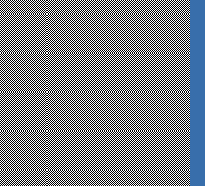 As said, there are missing lines spread evenly around. When i move the gamecursor onto one of those "lines", it itself is also affected. Everything is still fine in fullscreen

Looks like you are drawing sprites with "nearest-neighbor" interpolation and sprite size on screen is set few pixels smaller than it should be.

Check your drawing dimensions, do you really output the images in their native size.

It could be that in windowed mode you still assume the canvas size (render area) is 1920x1080, while in fact it is smaller by windows borders.

Not the answer you're looking for? Browse other questions tagged c# textures graphics monogame or ask your own question.

12
What makes scaling pixel art different than other images?

0
Confusion with the texture coordinate system in XNA
3
XNA Textures with background color
3
Is multipass rendering possible with SpriteBatch?
2
MonoGame not all letters being drawn with DrawString
1
Monogame resolution problem (without scaling sprites)
1
Textures created with Photoshop show up with a white border
2
Why is the standard on displaying missing textures is via a black and purple checkerboard?
0
Missing textures after making a build in Unity