I'm learning OpenGL and trying to make a simple simulation, which involves vehicles (drawn just as a rectangles) moving along predefined path. I've already read a few tutorials about designing a simple 2d car physics and tried to code something from a scratch.

Moreover, the 'front wheel' is also a vehicle's current position. (possition is at front, not in the middle as usual). 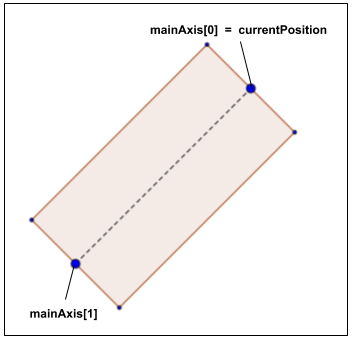 mainAxis[0] is the front wheel, mainAxis[1] is the back wheel

In most cases like described here or here, wheel movement is based on steer angle, which is fine when dealing with vehicle controlled by user input, but in my case I think I already have the direction of current front wheel movement - next node on the path.

This is how my movement function looks like for now: (I rewrote it in pseudo-code to simplify)

I know it does not involve factors like steering forces, friction or speed reduction before turning. I'd like to make vehicle position to update properly first.

The vehicle turns fine, front wheel position is correct, however it doesn't maintain the baseline (vehicle length), that is, the distance between the front and rear wheel.

(red rectangle is a vehicle, with mainAxis marked as black line and current velocity to target as white line)

I struggle to find a correct way to calculate wheels movement in a realistic way, i.e with preserving the car length (which is predefined).

Perhaps I should calculate back wheel movement reduction or move front wheel further...

Thank you in advance for any assistance

I think the culprit lies in this line:

I'm not sure if this achieves the kind of turning you envision, but try something like this:

This way the Axis length will definitely stay the same. This should be physically correct (to a certain extent), considering most real life cars are front-driven and the back wheels are "dragged".

In your existing code you are trying to move the back wheels with the same velocity along your old main axis, which results in the shortening of said axis.

Not the answer you're looking for? Browse other questions tagged physics mathematics movement car vehicle .

8
Differential programming for a vehicle
2
physics of 2D car racing game with heightmap
3
Math to steer a car
0
Realistically drivable car
1
Turn the front wheels of a car according to the car's bezier path
2
Are wheeled vehicles usually controlled by force applied to wheels or is movement simulated by a force applied to the vehicle?
0
Define a circle from a point on its circumference and an angle
2
Math needed to create a very simple 2D side view car game
0
Control how quickly 2D vehicle straightens out