I'm trying to build a interface that the user can move his finger around the screen an a list of images moves along a path. The idea is that the images center nevers leaves de path.

Most of the things I found was about how to animate using CGPath and not about actually using the path as the track to a user movement.

I need to objects to be tracked on the path even if the user isn't moving his fingers over the path. 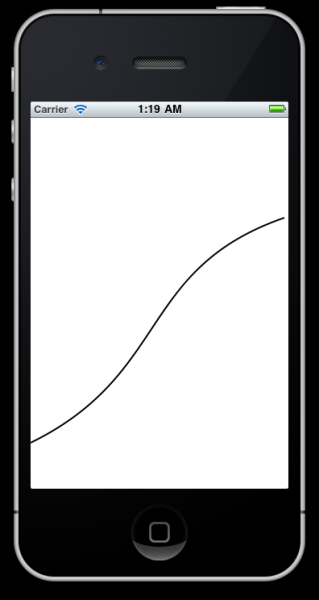 This is how I'm creating the path:

Any idead how can I achieve this?

However, based on your description, wanting an animation seems like it might not be what you want. IF the user is going to have 'live' control on the left/right slide being the location of the subview on the path, you might want to simply calculate the x/y of the path programatically, and apply the x/y values based only on the user's touches x value.

So, try using the NSBezierPath class to create your paths, then flatten them by calling bezierPathByFlatteningPath, finally, upon a touch that you want to update the view with, walk through the flattened path by looking at each 'elementAtIndex:associatedPoints' until you find the first one greater than your X value. The X/Y of that point will be the point you want to place your object.

Not the answer you're looking for? Browse other questions tagged iphone movement ios or ask your own question.

2
Smoother controls
1
Android Action_Move when moving between specific screen areas
1
Designing a four-directional movement control
4
How can I avoid a delay with continues touch detection in swift?
0
Rotate sprite direction Cocos2d
2
Isometric camera movement
0
Unity 2d_ Constant Player movement along the x axis
0
How do you program diagonal movement?
0
move along given path relative to the inital position