I have a quad in 3D space (a billboard in the real-world sense) that I want to move close to the camera so the user can inspect it. The quad is defined by the 3D coordinates of its four corners.

To accomplish this I compute target points very close to the camera for each of the corners.

(I use XNA's Viewport.Unproject() method which does something similar to this)

These world points that are close to the camera produce a very small quad: which is understandable if we look at this picture: 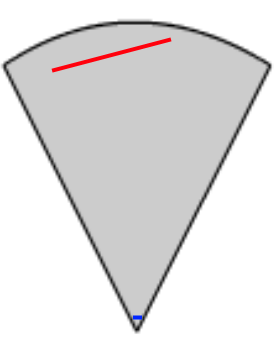 For each of the corners of the quad I linearly interpolate between the original position and the position near the camera.

Since I linearly interpolate the quad moves to its new position at a constant speed. I've verified this by ouputting the speed and distance to the console. However, the visual effect is that the quad first hardly moves and then all of a sudden moves very fast to its destination.

I think this is because the quad is being scaled down while moving closer (to fit the near plane) so it will stay relatively the same size on screen for a long time. Only once it comes very close it seems to move. (For example see this answer).

The question I have is: what can I do to make it look like the quad is moving closer at a constant speed?

I was thinking about not interpolating linearly but first move progress very fast and then very slow (Ive tried progress = sqrt(progress) which helped a little). But I'm not sure how I can compute the exact (or near enough) formulate to make this work.

Another idea I had was to bring the quad not so extremely close, but then there is the danger of it clipping with objects in the world.

The problem is that your constant movement speed - after perspective projection - creates non-constant perceived resize speed.

Instead of this you should move the quad by 1/X of the actual distance, picking the X for your needs. This way you'll never get to the camera position, but you can stop moving at some fixed distance.

Besides of any scaling that you may need you can use an Exponential function to make it independent of fps, or you may use one of the few Easing functions.

Not the answer you're looking for? Browse other questions tagged mathematics camera perspective .

16
An object twice as close appears twice as big?

3
How do I move a 2D top-down racing camera smoothly and show what's ahead of the player?
7
Determine corners of a specific plane in the frustum
2
Moving 2d camera in the y direction
8
Rotate a vector
16
An object twice as close appears twice as big?
2
Will performance suffer if I have a really large depth range but not very many objects?
2
Linear interpolation: reach moving destination regardless its speed
2
How to smoothly interpolate 2D camera with pan and zoom
0
convert world to screen coordinates with camera position and camera angle