I am using cellular automata to randomly generate caves in Unity. Attached is a screenshot: 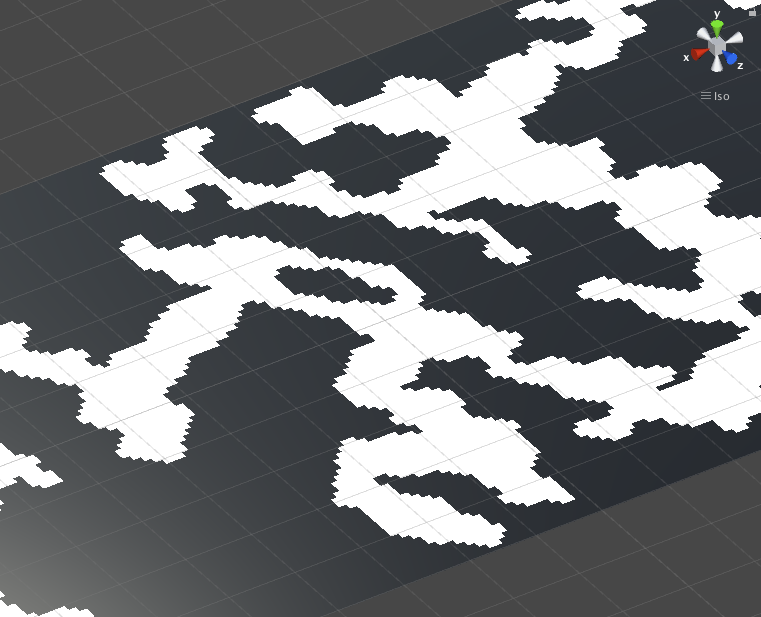 The black area represents walls. Walls can contain resources that can be mined.

Walls are made of blocks. A block should be destroyed when it is mined.

The naive approach would be to render a cube for each wall block. This won't work though because it will require too many objects to be on screen at once, even if the wall blocks are clipped to the viewport.

So how should I go about this? I was considering grouping sections of wall blocks together in a single mesh. When a block is destroyed, the mesh would be re-rendered with vertices for the block removed.

Or is there a better way?

A group of cubes are often called chunks. A voxel engine is the name of engines that generate meshes for this type of data.

Before that you generate black part as a 1 mesh and then generate other things inside that mesh if you need it, but then I would suggest to cutout space for these objects as probably they will have some scripts attached to them and they can't be part of the mesh.

And then while you divide your mesh into chunks with 100 area you divide the mesh too, add to those chunks some script that it's x, y position in jagged array of all chunks. Raycast from camera to enable current chunk neighbour chunks((x;y) +(0;1), +(0;-1), +(-1, -1).....). And if the chunk you were raycasting changes find the difference in x, y in array. Then you have all you need to find chunks that need to be disabled in array.

As for the mesh. You can raycast it and rebuild mesh on point where it was raycasted, but that is complicated and somehow inefficient and for example if you want to have blocks that change texture or crack it would be pain to do that. So what I suggest is those blocks that are near white area should be just normal blocks not attached to the whole mesh. And also for optimization those blocks could consist of group of 4 blocks, so if one block from the group gets destructed, mesh that is near those group should rebuild and on it's place should appear new group of 4 blocks. So now if player made a tunnel between mesh, the whole mesh would not rebuild, but just a part that was divided and also if he decides to just dig 3 blocks and go on it's better when he doesn't rebuild the whole mesh.

Also I would just made it not a mesh, but just a bigger cube, that gets replaced with 4 smaller and so on.

Not the answer you're looking for? Browse other questions tagged unity procedural-generation graphics-programming .